Vinyl Scratch, also known, in slight variations, as DJ Pon3, is a fan-named background pony who has acquired an outsized presence in the fandom relative to her importance in the show, where she has appeared at least once in each season.

The pony's name originated on /co/, where she was dubbed "Vinyl Scratch" and "DJ PON-3".[citation needed] A secondary YouTube account by MrYaridovich called "DJSCRATCHPONY" was opened on the day the episode aired. Sethisto of Equestria Daily used the name "DJ P0n-3" as early as February 5, 2011.[1] A poll on Equestria Daily cemented her name as DJ P0n-3[2], though the all-caps spelling initially proved more resilient. Hasbro later used a variation of the name, DJ Pon3, on their There's a Pony For That commercial, and yet another one, DJ Pon-3, in a February 2012 announcement that a toy version of the character would be released as a Toys'R'Us exclusive in the autumn of 2012.

To reconcile both names, many fans assume DJ Pon3 to be her stage name, with Vinyl Scratch being her real name, which was in fact the explanation later used on her second trading card. The stage name itself is a possible reference to Deadmau5, since both utilize a number in place of a letter at the end.

Vinyl's eyes are not visible underneath the goggles she wears in Suited for Success. The irises were depicted in all sorts of ways very early on,[A 1][A 2][A 3][A 4] but a sizable portion of the fandom eventually settled around considering them to be bright red. By early 2012, the vast majority of new images depicted her eyes as red.

In A Canterlot Wedding - Part 2, the DJ very briefly opens her eyes, revealing her eye color to be magenta. This has led to attempts to explain away the discrepancy between the show and "fanon" both jokingly[B 1][B 2] and seriously,[B 3] counter-arguments,[B 4] and declarations of defiance[B 5] and acceptance.[B 6] Vinyl's eyes are also shown to be magenta in the film adaptation My Little Pony Equestria Girls.

In conjunction with the red eyes, Vinyl is sometimes depicted as blind, and that's why she is commonly wearing the opaque goggles.[citation needed]

Vinyl is often depicted as a hip-hop DJ to the core and, just as often, is the go-to mare if you want to take part in Ponyville or Canterlot's night scene. She's known to be wild, unpredictable, and sometimes borderline insane, not giving a hoot what anypony else thinks of her words and actions. She's often paired, whether romantically or simply as an Odd Couple friendship, with the more cultured and sensible Octavia. While Vinyl generally finds Octavia's choice of music boring and can be a horrible tease, she does respect the earth pony and is usually the one to initiate the friendship/relationship if the two don't know each other from the get-go of a fic or comic. She has also been depicted as having a relationship with Neon Lights, a background unicorn pony, usually shown to be a lighting show designer. They often share the same personality in fan labor.

In an early video meme involving Vinyl Scratch, her one-second appearance in the first season was looped and overlaid with an excerpt of an existing track, giving the impression of the pony nodding to the beat.[C 1][C 2] The trend started practically immediately after Suited for Success aired, was propagated in particular by the YouTube users Trizero126 and MrYaridovich, and mostly subsided in summer of 2011. 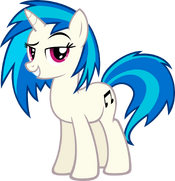