Thunderlane is a dark gray Pegasus stallion who usually works with Rainbow Dash in some capacity and is Rumble's older brother.

Thunderlane's personality varies depending on the work he appears in. However, he is generally portrayed as competitive and laid back though he can sometimes be very excitable and occasionally sensitive much like Rainbow Dash.

Thunderlane is rarely the central character in works he appears in. His appearances are often restricted to helping Rumble in some manner. Most works where he's the center focus involve him being shipped with another character.

Thunderlane's relationship with Rumble is generally portrayed in a positive light with Rumble often going to his older brother for advice. Thunderlane is commonly shown to be very protective of Rumble.

Because they've interacted on numerous occasions, Thunderlane is generally paired with Rainbow Dash[1][2] as well as Soarin.[specify]

Thunderlane has been shipped with numerous characters often based on limited interactions in the show. In Hurricane Fluttershy, Blossomforth and Thunderlane appear alongside each other and even have a brief, comedic interaction. A few fanworks thus portray them in a relationship.[3]

In the aforementioned episode, Cloudchaser pets Thunderlane's mane. Many fanworks therefore ship Thunderlane with Cloudchaser.[4] This relationship is sometimes made polyamorous with the addition of Flitter.[5] The official trading cards state that the three are longtime friends.

Occasionally, especially after Thunderlane saved her in Wonderbolts Academy, Rarity has been paired with Thunderlane as well.[6][7] 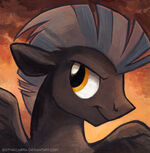 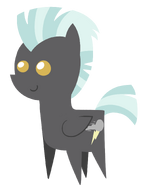 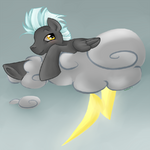 Retrieved from "https://mlpfanart.fandom.com/wiki/Thunderlane?oldid=84532"
Community content is available under CC-BY-SA unless otherwise noted.