Start a Wiki
Sunset Shimmer is a female unicorn that appears in My Little Pony Equestria Girls as the main antagonist and in subsequent Equestria Girls media as a protagonist. She is a former student of Princess Celestia.

Sunset is generally similar to Trixie in terms of personality and power: both are portrayed as a foil of Twilight Sparkle, and both have been reformed and saw the error of their ways.

A few fan works depict Sunset Shimmer before the events of Equestria Girls.[FA 1][FF 2] Other fan works posit the idea that Sunset could have turned out much like Twilight if she learned about the magic of friendship early on.[FA 2][FA 3]

Because Sunset is on the road to trying to restart her life anew and seeks to be forgiven for everything she has done, some fans often consider the possibility that while she isn't a bearer of one of the Elements of Harmony, some fan works suggest that she could represent another element. Sunset's element is often believed to be forgiveness, redemption, or atonement; one other theory is that she inherited Twilight's element of friendship and acts as a balance and/or fill-in for Twilight in the human world. [citation needed]

Sunset is most often paired with Flash Sentry, her ex-boyfriend in the movie,[FF 3][FF 4] or with Twilight Sparkle, a pairing referred to as "SunLight" (or "SunsetSparkle").[FF 5]

Sunset Shimmer is also occasionally paired with Trixie, though this is fairly uncommon.[FF 6]

Since the release of Rainbow Rocks, stories pairing Sunset with any of the Dazzlings, usually Adagio Dazzle[specify] (the pairing of which is sometimes referred to as "SunDagio") or Sonata Dusk,[FF 7] have also appeared.

While villain-wise Sunset Shimmer has fared better than King Sombra, reactions to her range from mixed to negative among fans. The back story given to her in the film has received praise for its depth but has also received criticism for lacking detail.[FN 1][FN 2] Her character motivation is also commonly criticized as flimsy.[FN 3]

The common reason for her negative feedback is due to a combination of being a new character introduced in a then hated product, the generic "Alpha Bitch" of the movie, and being redeemed too quickly, to the point of straining credulity.[citation needed] As of the premiere of Rainbow Rocks, however, Sunset has been far better received due to her post-redemption character development. 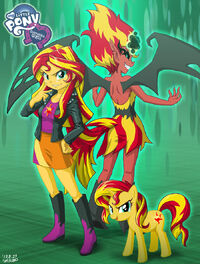 Retrieved from "https://mlpfanart.fandom.com/wiki/Sunset_Shimmer?oldid=92557"
Community content is available under CC-BY-SA unless otherwise noted.