Story of the Blanks

Apple Bloom is on her way home after adventuring with her friends when she finds Twilight Sparkle on her way to visit Zecora in the Everfree Forest. Apple Bloom insists on tagging along, much to Twilight's dismay. They deliver the books to Zecora's house safely, but she warns Twilight and Apple Bloom to leave the forest as quickly as possible. As they try to leave, Twilight finds some trees have fallen in their path. While she tries to move them, Apple Bloom spots another filly watching them, and decides to follow her through the forest.

She eventually finds herself in a quiet village known as Sunny Town, where none of the residents living there have their cutie marks, despite most of them being adults. After some exploration, she finds an abandoned house hidden behind the town. She makes her way in, only to find the burned skeleton of a filly sitting in the fireplace. As she tries to escape, she discovers the town ruined and covered in overgrowth. Zombies of the ponies she had met stalk her as she runs. It's revealed that a young pony named Ruby had discovered her cutie mark, and the townsponies, believing it to be a curse, murdered her. Ruby's ghost eventually helps Apple Bloom escape, and she and Twilight go home together.

A young earth pony who lived in Sunny Town prior to the curse. She had discovered her special talent for finding things, signified by a magnifying glass cutie mark. The townsponies believed the mark to be a curse; Ruby was murdered, her skeletal remains placed in the fireplace in an abandoned house. Her ghost roams the Everfree Forest, and when she accidentally leads Apple Bloom to the haunted town, she apologizes and helps her escape. She has a grey coat and a light blonde mane with lighter orange highlights, and her eyes glow gold.

An earth pony living in Sunny Town, presumably Ruby's friend. When Apple Bloom finds her, she is locked up in the house Roneo was standing in front of and crying over Ruby's death, feeling guilty for allowing her to die. Later, when Apple Bloom tries to escape the town, Mitta appears as a zombie and holds the other zombies back, giving Apple Bloom a chance to run. She has a light grey coat and a dark red mane.

Her zombie form has a dark red coat and a jet black mane, and her eyes glow red. She appears to be the only benevolent resident of Sunny Town, and the only one who knows that everyone in Sunny Town was zombified as punishment for murdering Ruby. She’s the only zombie, which is safe to interact with at night.

An earth pony and self-proclaimed "celebration planner extraordinaire" who was arranging a party around the time of Ruby earning her cutie mark. It was under his orders that her murder was executed, believing "the mark" to be a curse, hinting that other ponies had been murdered for earning cutie marks too. He has a grey coat and black hair.

He is the first zombie to be heard from, but we can’t see him. Zombie character image is also completely black.

An earth pony living in Sunny Town. He has a crush on Starlet, and he had been planning on giving her a gift (a red ruby) before losing it. Apple Bloom helps him find it, and he presents it to Starlet. His house is used to lock up Mitta after Ruby's murder. He has an orange coat and a blue mane.

He is the last zombie that can hurt Apple Bloom. Two other zombies came with him.

An earth pony living in Sunny Town. She has a crush on Roneo, but gets worried when he doesn't talk to her. When he presents his red gemstone to her, she tells him that his love was more than enough of a gift. She has a white coat and an orange mane.

She is the third zombie to be met – her zombie form is faster than the others, and seems to "twitch".

An earth pony living in Sunny Town. When Apple Bloom talks to him, he says he's never heard of cutie marks before. He has a brown coat and an orange mane.

He is the second zombie met. While he does not run like Starlet, he will pursue Apple Bloom.

An earth pony living in Sunny Town. She explains that since their town has everything they could ever need, nopony leaves the town. She has a green coat and a mossy green mane.

After Ruby's murder, a curse was put on the residents of Sunny Town, turning them into zombies. Their flesh hangs off their black bones, and they have glowing red eyes and fangs. They chase Apple Bloom, trying to force her to become one of them. They also claim this mutation "protects" them from obtaining a cutie mark as the player will read if caught by one, hinting that once they become this form, they will never obtain their cutie mark.

Game has an Easter Egg – hidden Level Editor, that can be accessed by pressing the HOME and END keys during the game, and is only visible if you resize the window to be taller than it is wide (which is only possible if you're viewing the SWF file itself, whether online or a downloaded copy).

Story of the Blanks was the winning entry to the Creepypasta Game Contest on Equestria Gaming, which ran in July 2011. On July 13, 2011, the game was reviewed by Strawberry Spice, the site's owner at the time, who gave the game a score of 8 out of 10, making it the first game on the site to be given the score. As of April 4, 2012, there is only one other game on the site to receive that score (the other being Pony Platforming Project, reviewed on December 21, 2011.)

Story of the Blanks has inspired several other works, such as a prose version of the game's story and these pieces of fan art. 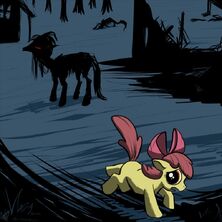 Story of the Blanks image gallery