Start a Wiki
Spitfire is the captain and most prominent member of the Wonderbolts. Consequently, she is also one of Rainbow Dash's idols.

Use in fan labor

In fan fiction, she is typically considered the Captain or Co-Captain of the Wonderbolts, and was so even before the episode Hurricane Fluttershy made it official. The story Spitfire's Day Off sees her as part of a family tradition; her grandfather had been Captain of the team as well.

Spitfire is often given one of two distinct personalities. She is often portrayed as relaxed and down-to-earth, with a sense of humor.[1] This corresponds with her personality in seasons 1 and 2 of the show. This version of the character can sometimes act very unprofessionally and even irresponsibly in some fan works.[2] Spitfire appears in this form more commonly in fan works which portray the Wonderbolts as an acrobatic team primarily or have Spitfire as the main character.

In other fan works, Spitfire is portrayed as a commanding figure. In this form, she is more serious and focused, maintaining a strict demeanor.[3] This persona has increased in popularity since Wonderbolts Academy. This variant of the character more commonly appears in fan works that portray the Wonderbolts as a military force.

Spitfire is most commonly paired with Soarin. This shipping is known as SoarinFire.[4] SpitDash, the pairing of Spitfire with Rainbow Dash, is also fairly popular.[5]

In Wonderbolts Academy, after learning that Rainbow Dash and Lightning Dust had finished a training exercise early, Spitfire responded by saying, "That's an academy record." The quote has since started a meme in which a reference to it is made whenever an improbable event occurs.[8][9][10] 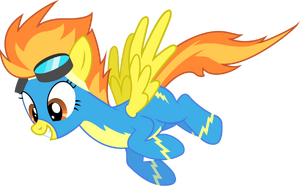 Retrieved from "https://mlpfanart.fandom.com/wiki/Spitfire?oldid=93760"
Community content is available under CC-BY-SA unless otherwise noted.