Spike is a baby Dragon and a main character in My Little Pony Friendship is Magic. He plays the role of Twilight Sparkle's assistant, and has a semi-romantic relationship with Rarity in the show. His in-show personality traits almost always carry over into any fan labor depicting him.

Spike has a wide display of fan labor dealing with the aspect of what would happen should Spike grow up. The fanfic The Centerpiece Of My Collection and Collection Of My Centerpiece both depict Spike as having grown very old, and lives in a cave with a statue of Rarity. Most of these fan works depict Spike as outliving all the ponies (apart from Princess Celestia and Princess Luna) by several centuries. Some of the fan works rather focus on Spike outliving Twilight and his other friends; these can either be presented in a predominantly bittersweet way[O 1] or in a predominantly sad way.[O 2] A comic by the mod of the Ask Twilight Sparkle ask blog features Twilight imagining Spike growing too large for the library, and flying off to be a dragon; when Twilight comes to this conclusion, she tearfully kisses the sleeping Spike on his forehead. The comic, in video form and put to the end credits music from the Hey Arnold! episode "Parents Day", was posted to Equestria Daily on September 19, 2011.

Many fanfics try to answer the question of who Spike's biological parents were and how Princess Celestia got his egg. In the fanfic The Elements of Harmony and the Savior of Worlds, he is revealed to be the grandson of the Spike from the G1 cartoon.

PONY.MOV features Spike as a stoner, and is frequently shown taking cannabis with a bong. He mentions in MAGIC.MOV that his girlfriend has been trying to get him to quit weed.

As Twilight Sparkle's assistant, and shown in the episode The Cutie Mark Chronicles to have been hatched from a dragon egg by her magic, Spike is often depicted as part of Twilight's family. Most often, their relationship is viewed as that of elder sister/younger brother. In Past Sins, he is mentioned to be like a kind of son to Twilight, though he insists that he would make a better uncle for Nyx, especially if Twilight gives him his "awesome mustache" back. In the story Mare-Do-Well: Regeneration, Twilight becomes very distraught after Spike's death, stressing how he was "just a baby" and was not responsible for his actions.

In some stories Spike is presented as Celestia's adoptive son.[CS 1][CS 2]

Based on his in-show crush on her, Spike is most commonly shipped with Rarity, and many writers use this as the foundation for plot twists. They tend to get more explicit than the show is likely to, and specify whether Rarity actually feels the same towards Spike. In the comic Heart's Desire by Karzhanii, Spike's crush only grew into love because of a magical potion Rarity had given him. The number of fan works depicting Rarity loving Spike back has increased greatly since the episode Secret of My Excess in which Rarity acknowledges Spike's feelings for her. This particular shipping is most commonly called "Sparity".[R 1][R 2][R 3][R 4][R 5][R 6][R 7]

He is also shipped with both Apple Bloom, Sweetie Belle, and on rare occasions, Scootaloo. Though usually not at the same time. These shippings are called “SpikeBloom”, “SweetieSpike”, and "Scootaspike" respectively.[A 1][A 2][A 3][S 1][S 2][S 3][OS 3] There are also occasions when he is shipped with all three Cutie Mark Crusaders.[OS 4]

A less common but still popular shipping is Twilight Sparkle and Spike, known as TwiSpike or Spilight.[T 1][T 2][T 3] In fan fiction, this ship is most prevalent in clopfics.[T 4][T 5] If it appears in a story that isn't a clopfic, there is a good chance it is for a sex joke; for instance in the fic "Letters From a Disgruntled Friendship Student", Twilight Sparkle makes Spike her sex slave for a time.[T 6] There are some instances in which Twilight falls for Spike at an older age.[T 7]

He has also been shipped with Applejack due to episodes such as A Dog and Pony Show and Spike at Your Service.[OS 5]

There are groups on deviantArt and Fimfiction where Spike is shipped with Rainbow Dash. It is known as "SpikeDash" or "RainbowSpike".[OS 6]

Due to Fluttershy's first reaction to Spike in season 1,[dubious – discuss] he is also sometimes shipped with Fluttershy. This is known as "Flutterspike".[OS 7]

Spike is very rarely shipped with Pinkie Pie, though one notable example is "Here's to You, Pinkamena Pie!"

Season six has introduced two more notable ships with Spike. Fans have started shipping him with Starlight Glimmer even before her reformation, but during the season six premiere, the two interacted to a larger degree.[citation needed] After Gauntlet of Fire, Spike is also shipped with Princess Ember.[citation needed]

Spike has also been known to be shipped with Queen Chrysalis,[C 1][C 2][C 3][C 4][C 5] as well as most other background ponies and secondary characters, including Princess Celestia,[specify] Princess Luna,[specify] Derpy Hooves,[specify] Maud Pie,[specify] Coco Pommel,[specify] Trixie,[specify] and even Gilda.[OS 8][OS 9] 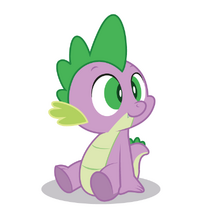 Retrieved from "https://mlpfanart.fandom.com/wiki/Spike?oldid=84957"
Community content is available under CC-BY-SA unless otherwise noted.