Sparkler is a unicorn background pony and one of the first ponies the audience meets in the show's first episode, when Twilight passes her and Lyra on her way to the palace library. She is also known as Amethyst Star after a toy that resembles her, and is referred to by that name in the credits of the season five episode Slice of Life. Her first speaking role happens in the episode The Mysterious Mare Do Well, where she becomes an unwilling part in Rainbow Dash's attempts to demonstrate heroism. In that scene, she shares a picnic spread with Tootsie Flute, a filly who is since then occasionally assumed to be her daughter.

Sparkler's personality in fan labor is not well defined. She is a fairly frequent subject of non-narrative fan art, but with one exception, she has not had much impact in fan fiction; for instance, she is not part of the character search mode on FIMFiction or the Pony Fiction Archive as of January 24, 2012. She is a main character in the webcomic Friendship is Tragic, where she has a somewhat pushy and abrasive personality.

However, since an in-show appearance in the episode Sisterhooves Social, where she is paired with Dinky in a competition, some fans speculated about a special connection between the two: sometimes they're connected through a mentorship program,[ex. 1] sometimes they're depicted as sisters outright,[ex. 2] half-sisters,[ex. 3] and sometimes Sparkler is depicted as Dinky's foalsitter.[ff 1] She is a main character in the fanfic Shimmer, in which she comes from an abusive household and has been adopted by Derpy Hooves. In Silent Ponyville she is also Derpy's adopted daughter.

Due to her connection to Derpy, and therefore her connection to the Doctor, she and Dinky both are depicted as the Doctor's daughters, either biologically or loomed. In the ask blog Ask Discord Whooves she was genetically loomed in a similar way to Jenny but with Derpy's DNA. Of the two sisters, she is the closest with the Doctor, who named her "Amethyst Star" for its similarity with "Amy", her nickname.

"Sparkler" was the name first proposed by Lauren Faust for the unicorn Rarity, but had to be dropped because Hasbro had lost the rights to the name. This pony was named "Sparkler" due to her similar cutie mark with the actual Sparkler.[citation needed] 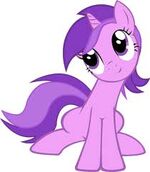 Retrieved from "https://mlpfanart.fandom.com/wiki/Sparkler?oldid=84941"
Community content is available under CC-BY-SA unless otherwise noted.