Soarin is a prominent member of the Wonderbolts and is therefore an idol of Rainbow Dash. His position and upbeat personality also makes him good friends with Spitfire.

Use in fan labor

Soarin's appearances in fan works is mostly restricted to those also featuring Rainbow Dash or Spitfire. As a Wonderbolt, he is generally depicted as either equal or directly subordinate to Spitfire. Regarding fanfiction, Soarin is mainly used in romance-tagged stories.[FF 1]

Soarin is generally portrayed as friendly and upbeat, making him well-liked by others. His personality contrasts with Spitfire's more relaxed demeanor. Despite his usually energetic persona, Soarin can be serious and professional when necessary.

Soarin's most notable relationships are with Spitfire and Rainbow Dash. These shipping pairs are known as SoarinFire and SoarinDash respectively.[FF 2][FF 3] In stories based around a platonic relationship, Soarin and Spitfire often resemble siblings.[FF 4][FF 5] When not shipped with Rainbow Dash, Soarin often acts as a mentor for her, usually while in the guise of a Wonderbolt officer.[FF 5]

Soarin is also occasionally paired with Applejack in what is known as SoarinJack.[FF 6] This pairing gained popularity after the two interacted in The Best Night Ever. Soarin is also sometimes used in same-sex pairings. In those fan works, he is most commonly paired with Braeburn.[FF 7][FF 8]

The Best Night Ever has led to some fans associating him with pie with numerous works of fan art depicting Soarin with a pie obsession.[FA 1][FA 2][FA 3] 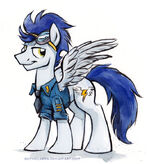 Retrieved from "https://mlpfanart.fandom.com/wiki/Soarin?oldid=85267"
Community content is available under CC-BY-SA unless otherwise noted.