Shining Armor is a white male unicorn. He is Twilight Sparkle's older brother and the husband of Princess Cadance. He was the captain of the Canterlot Royal Guard prior to becoming Prince of the Crystal Empire.

Shining Armor is generally portrayed as laid back when not carrying out official duties. He can even be humorous on occasions, generally using dry humor much like his sister. When working, he takes on a serious persona. He is almost always shown to be highly protective of those he cares about.

A few fanfics center around Shining Armor attempting to make amends with Twilight following the events of A Canterlot Wedding - Part 2.[1][2]

Sometimes, Shining is depicted as having offspring with Queen Chrysalis. The child would be conceived before or during the events of the season two finale.[3]

In fanfiction based around Twilight being in a relationship, Shining Armor will often take on the stereotypical older brother role.[4][5]

An in-joke about Shining Armor is that corn dogs are his favorite snack, due to the fact that the official voice actor has played a character that likes corn dogs.[specify] This joke is referenced in the Friendship is Witchcraft episode Foaly Matripony.

In fan fiction based on My Little Pony Equestria Girls, Shining Armor's human counterpart is sometimes (even typically) portrayed as a police officer or other law enforcement official.[6][7]

Shining Armor is generally portrayed as very close to his younger sister Twilight though two a lesser extent than when the two were younger.

Because of a scene in The Crystal Empire - Part 2 in which Shining Armor helps a weakened Cadance to take flight by launching her manually, numerous fan works are based on Shining Armor throwing Cadance or assisting others to do it.[11][12][13][14] 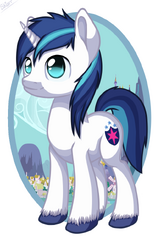 Retrieved from "https://mlpfanart.fandom.com/wiki/Shining_Armor?oldid=84458"
Community content is available under CC-BY-SA unless otherwise noted.