Screwball, also sometimes known as Topsy Turvy, is a curious anomaly of a pony. She is very closely associated with Discord, who was in some way or another directly responsible for her existence in The Return of Harmony Part 2.  She later makes a cameo in the official My Little Pony: Friendship is Magic comic book series by IDW, where she scares some cats, showing that she remains a curious anomaly of a pony even after Discord's defeat.

In fan-fics, she has been portrayed as a devotee of the draconequus and sometimes as his right-hand mare, harbinger or his daughter. Alternatively, she has also been portrayed as an unfortunate victim, transformed into a being that is not wholly equine but not inherently bad enough for the Elements of Harmony to automatically fix.

In School Daze, by Paleo Prints, Screwball is a strange but fundamentally good adolescent filly who owes her existence to Discord but adopts Cheerilee as a caretaker. She usually says the exact opposite of what she means, but can force herself to speak properly if she absolutely must be understood. Doing so seems to require dangerous amounts of mental strain however, as she tends to get a nosebleed in the process of reversing her tongue. She greatly enjoys role-playing games.

In the Screwball Trilogy, the eponymous pony is a product of pure chaos being channeled through an Obsessive-compulsive, rigorously structured mare named Button Stitch. Her "speech" is pure nonsense and sound effects and she engages in random and increasingly cruel pranks on Ponyville.

In Head Full of Cotton Candy, by TheManWithTwoNames, Screwball initially introduces herself as Savoir Faire, an adviser to the Canterlot Court who takes it upon herself, through some rationalization that is expected of her, to guide Discord, who spontaneously came into being in reaction to a high degree of conflict within the kingdom, after naming him the new king of Equestria after the deaths of Celestia's and Luna's mother and father. She's determined to keep Discord's child-like curiosity and predilection for experimenting at the very least channeled toward improving the lives of ponies across the kingdom. She frequently argues with her pessimistic alter-ego whenever Discord takes matters into his own hands, which usually results in some catastrophe. She reveals her true identity and history after a battle against the Spirit of Nature, and explains that she had actually been a court jester at Canterlot. She is surprised when Discord is unconcerned by the revelation and realizes that he views her as a maternal figure, but happily takes on the role of both teacher and mother to the draconequus.

In Shipping and Handling by Pegasus Rescue Brigade, Screwball is a loyal servant of Discord who lives in seclusion since his defeat, awaiting his return. Essentially an avatar of Discord, Screwball possesses significant reality-warping powers and delights in spreading chaos. The antagonist of the story employs her to ruin a significant event the protagonists, but has the tables turned when Screwball is persuaded to spread some chaos on her too.

SandJosieph's unfinished musical Daddy Discord portrays Screwball as Discord's literal daughter, who even accompanied him to baseball games; she received her cutie mark at one such game. She visits her daddy's lifeless statue and ends up reviving him.

In Equestria: A Total War by emkajii, Screwball is a filly that is the result of Discord's meddling with a filly which turns her into an unstoppable, insane terror with nearly unlimited amount of chaotic magic.

Several works of fan art have made Screwball the inventor of the gyrocopter Rainbow Dash's pet Tank receives at the May the Best Pet Win!.[ex. 1][ex. 2]

In the Pony POV Series, meanwhile, her name was originally Golden Skates, and then Golden Tiara. She was finally given her nickname 'Screwball' by the mental institution's orderly. She is, or was, the wife of Filthy Rich, who is named Onyx Tiara in the story, and mother of Diamond Tiara. She has no direct relation to Discord, and went insane due to a tragic, hereditary mental illness. She comes across as peaceful, friendly, and has violently escaped the mental hospital several times. Her cutie mark was originally a golden crown before her insanity twisted her cutie mark from her damaged Ego. According to the story, the illness could be related to hers, and by extension, Diamond Tiara's, great ancestor, who held mysterious ties to Discord. 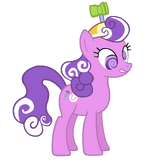