Scootaloo is a major supporting character in Friendship is Magic and one of the Cutie Mark Crusaders. She is friends with Sweetie Belle and Apple Bloom.

Numerous pieces of fan labor revolve around the fact that, as of the end of season two, Scootaloo has not shown the ability to fly. This is sometimes explained as a birth defect, but more often Scootaloo is simply a late bloomer in this regard. In the story A Filly's Wings, she is magically turned into an Earth pony, convinced that she was never supposed to be a Pegasus, before realizing that her wings are useful after all.

The song I'll Fly Higher by MandoPony and AcousticBrony has Scootaloo declare that she will eventually be not just a great flyer, but a great pony, despite the many people trying to put her down. Scootaloo's Wings by Jackle App addresses Scootaloo directly, with a similar message.

A one-page comic called To the sky by an artist going only by "---", published on April 26, 2011, has Scootaloo accept that she will never fly as well as (it is implied) Rainbow Dash. So she finds her own way to soar across the skies. Wearing a space helmet and a jetpack, she takes off, soaring towards the stars. Scootaloo with a jetpack and/or as an astronaut is a minor recurring image motif.[FA 1][FA 2][FA 3][FA 4]

Scootaloo is the only one of the Crusaders to have no known relatives mentioned in the show. This leads fans to speculate as to what happened to Scootaloo's family or why Scootaloo doesn't communicate with them on-screen. The most common speculations are that she is an orphan or lives in an abusive or neglectful household.

In addition to fan works suggesting Scootaloo is an orphan, numerous other fan works poke fun at the speculation itself by having characters speculate as well.[FF 1][FF 2][FF 3]

A very common storyline sees Scootaloo's family circumstances (either as an orphan or with lousy parents) being revealed, and her subsequently being adopted by other characters, usually Rainbow Dash[FF 4][FF 5][FF 6] (a concept that has increased in popularity since Sleepless in Ponyville). Other ponies, such as Twilight Sparkle [FF 7] or the Apple family[FF 8] have also been written as adopting her. Multiple groups on FIMFiction [1] [2] exist for stories based around this concept.

Other stories depict her with loving parents who simply aren't usually involved in her daily life for various reasons, such as her not wanting to be seen differently by other ponies because of who they are[FF 9], or other, stranger circumstances.[FF 10]

In The Infinite Loops (a series in which most universes have a section of time repeating; in MLP's case, the events depicted in the series, starting with seasons 1-3 and later expanding as additional material was released), Scootaloo's status as having no confirmed family in baseline is discussed on occasion. In particular, MLP Time Loops 178.11 is based around a group discussion in which pretty much every Equestrian Looper talks about the times they or others (both Loopers and non-Loopers) have been a parent or sibling to her. [FF 11]

After the chapter book Ponyville Mysteries: Riddle of the Rusty Horseshoe established that Scootaloo's parents were frequently away and introduced Scootaloo's paternal aunt Holiday and Holiday's marefriend Lofty, who stayed with Scootaloo during such times, multiple fics have been written including the pair. [FF 12] [FF 13]

From early 2011 to about the start of season 2, stories and story scenarios implying or stating outright that Scootaloo came from an abusive household became so common the term "Scootabuse" was coined to describe them.[FF 14][FF 15][FF 16] Its definition quickly expanded to be used for any story or comic in which Scootaloo is hurt physically or emotionally for whatever reason. This includes stories like Rainbow Factory, in which Scootaloo is sentenced to death by a fascist Cloudsdale society and faces off against an insane Rainbow Dash. Rainbow Dash is a fairly common perpetrator of violence against Scootaloo generally in these types of stories, though she also occasionally appears comforting Scootalo or rescuing the filly from these circumstances.[FA 5][FF 17]

Heartwarming narratives featuring Rainbow Dash and Scootaloo are sometimes called "Scootalove" in pushback to the other term. They don't necessarily involve a dark past; for instance, the slice-of-life story Sisterhooves Slighted simply casts Rainbow Dash in the role of a big sister to Scootaloo on a day when the other Cutie Mark Crusaders are busy with their real sisters. Other ponies who care for her in other fanfics are Fluttershy and Twilight Sparkle.

Jokingly, Rainbow Dash's dismissive attitude towards her biggest fan is occasionally referred to as "Scootabuse" as well.[FA 6][FF 18]

"Scootabuse" stories have become less prevalent since the start of season two, but some still get published every once in a while.

The most prevalent meme involving Scootaloo is that she is a chicken, or at least considered to be a chicken by others. It originated in the episode Stare Master, where Apple Bloom first accuses Scootaloo of being "chicken" when the Pegasus claims not to want to reveal how chickens are called, and then the former tries calling chickens herself, using Scootaloo's name. She is called a "dodo" in The Return of Harmony Part 1, another flightless bird, but that has not gotten as much traction as the chicken meme.

The meme is expressed in a variety of ways. The most common ones are simple images or comics linking Scootaloo and chickens in some way.[FA 7][FA 8][FA 9][FA 10][FA 11][FA 12][FA 13][FA 14] In conversations between fans on message boards, blogs or r/mylittlepony, "Scootaloo" and "chicken" are often used synonymously. The short story Scootaloo's Parents is a parody of this meme.

McDonald's of Germany held a contest in early 2012, titled "Mein Burger 2012", asking customers to create and name their own sandwich. One of the sandwiches that made the finals is called "Scootaloo", a chicken sandwich, named by its creator after the character from the series.[3] The sandwich received significantly more votes than any other in the competition.[4]

In Equestria Girls, human Scootaloo dances like a chicken at the school dance, in reference to this meme.

Scootaloo has been shipped with some of the other foals of the show. She is most commonly paired with Sweetie Belle. This pairing is called ScootaBelle.[FF 19] ScootaBloom, the pairing with Apple Bloom, is also fairly common.[FF 20] For straight pairings, Scootaloo is often paired with Rumble.[FF 21] Additionally, she is paired with Pipsqueak though less often.[FF 22]

Like with her fellow Crusaders, Scootaloo's cutie mark varies widely according to fan interpretation. Common elements of her mark have included lighting bolts, scooters, flaming tires, helmets, and other stunt-related things.

In the episode Crusaders of the Lost Mark, she earns her cutie mark in the show: a shield with a wing and lightning bolt on it. 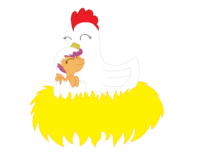