Rarity is one of the main characters of Friendship is Magic, where she represents the element of generosity. In informal popularity polls, she tends to come in at or near last when compared to the other main characters (such as on this poll on the official My Little Pony Facebook page, or this poll on Equestria Daily. She is, however, the favorite "Mane 6" pony of a number of notable people in the fandom, including Equestria Daily's Cereal Velocity and the musicians d.notive[citation needed], Interrobang Pie[1] and WoodenToaster[2].

Rarity's relationship to her sister differs. Most often, it is similar to the one in the show: Rarity loves Sweetie Belle, but she can also get on her older sister's nerves. There is also the interpretation that Rarity would prefer her sister to be a "mini Rarity" with the same interest in fashion and makeovers; if Sweetie Belle cannot provide that, Rarity becomes neglectful of her and sometimes looks out for a replacement.[FA 1] Before the introduction of their parents, one interpretation considered Sweetie Belle Rarity's sister-in-name-only: she was actually Rarity's daughter from an affair with an unknown stallion. [FA 2]

Like on the show, Spike commonly has a crush on Rarity in fan fiction and comics. They tend to get more explicit than the show is likely to, however, and specify whether Rarity actually feels the same towards Spike. In the comic Heart's Desire by Karzhanii, Spike's crush only grew into love because of a magical potion Rarity had given him. The number of fan works depicting Rarity loving Spike back has increased greatly since the episode Secret of My Excess in which Rarity acknowledged Spike's feelings for her, and accepted them.[citation needed]Spike and Rarity shippings are typically called "Sparity".

As far as homosexual pairings are concerned, the most common one is "RariJack".[FF 1][FF 2] It presumably stems from the episode Look Before You Sleep, which featured both Rarity and Applejack in close quarters and highlighted their differences and how they are eventually able to overcome them and work together.

Heterosexual pairings aside from the aforementioned "Sparity" typically pair Rarity with Fancy Pants (attributed to the episodes Sweet and Elite and A Canterlot Wedding - Part 2), Braeburn, Thunderlane (as of Wonderbolts Academy), or her gender-swapped counterpart Elusive, such as in On a Cross and Arrow. Despite their lack of interaction in the show, some fans have also depicted her in a relationship with Applejack's brother Big Macintosh (RariMac) on the basis of "opposites attract."

The Mentally Advanced Series' Rarity is extremely promiscuous, but heterosexual.

While depictions of the Mane 6 in humanized/anthropomorphized fan art tend to vary widely, Rarity is almost always depicted as tall with a slim and shapely build. Fan works that depict her as being particularly well-endowed or with an otherwise sexual theme are referred to as "Raritits".

Like some other ponies, Rarity is occasionally re-imagined as something else for the sake of humor, in her case a marshmallow due to her pure white color and the peculiarities of the show's character design.  Variations of the meme include Rarity being depicted as a marshmallow, being made of marshmallows, or having an overwhelming hunger for mashmallows.

During the events of Simple Ways, Rarity adopted a "country girl" persona in order to attract the attentions of a famous travel writer named Trenderhoof who was attracted to Applejack instead. Fans dubbed the incarnation "Rarihick" and fan works are usually parodies of the hillbilly culture.

In the second storyline of the official comic, Rarity was kidnapped and possessed by the Nightmare Force (the same power which turned Luna into Nightmare Moon) which transformed her into an evil version called Nightmare Rarity until Spike and the others were able to restore her to normal. Fan works of Nightmare Rarity depict her not so much as evil but as a more seductive and sensual version of Rarity. Nightmare Rarity is also occasionally depicted alongside Rarity as a separate character rather than a corrupted incarnation with the two of them sharing a mutual sense of rivalry.

In one of the most random memes produced by the fandom, Rarity is depicted engaging giant crabs in fights to the death or just having an overwhelming hatred for all crustaceans, the joke being that bloody combat is completely out of character for her prim mannerisms. 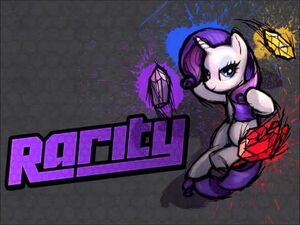