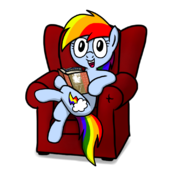 Rainbow Dash Presents is a series of videos written and created by FiMFlamFilosophy. They are presented as readings, but are actually liberal adaptations of popular pieces of fan fiction. In a typical episode, "Rainbow Dash" (using the character's altered personality from The Mentally Advanced Series by the same author) attempts to read the respective text to an audience, but gets distracted, altering and embellishing the story in a humorous manner. Each video is accompanied by still images by artist Petirep. Later episodes are more elaborate both in their story structure and their illustration, increasingly featuring animated sequences. Following the release of the sixth episode, the team announced several short films in development.[1] At the time of its release, the ninth episode was the final planned video, and it was announced that the team would produce a finale series for the Mentally Advanced universe titled Equestria Primates.[2] However, Equestria Primates was later put on hold with only a preview released, and on June 21, 2015, FiMFlamFilosophy stated on his Tumblr that he had begun work on the screenplay for a possible new episode of Rainbow Dash Presents (though whether it would be produced or not was still uncertain).[3]

The shorts are not focused on either Rainbow Dash or fan fiction. However, they use similar art and are included in FiMFlamFilosophy's Rainbow Dash Presents playlist.