Rainbow Dash is one of the "Mane 6". She is a friend of Twilight Sparkle, Pinkie Pie, Fluttershy, Applejack and Rarity.

She also represents the element of loyalty.

Rainbow Dash is fast, blunt, and obsessed with looking "cool." She can often be found napping on clouds, practicing new tricks, or actually doing her job of maintaining Ponyville's weather. She can be extremely boastful at times but always comes through for her friends. She also tries her best to reach her goals without giving up, and she is loyal to her friends and Ponyville and will always try to help them in their time of need.

Use in fan works

Common themes for Rainbow Dash include:

In humanized and anthropomorphized fan art, Rainbow Dash is mostly depicted as thin and wiry as well as usually being the shortest of the Mane 6. Because of her tomboyish personality and athleticism, Rainbow Dash is rarely portrayed in fan art as being especially well-endowed to the same level as the rest of the Mane 6 are (when she is, the meme is sometimes referred to by the fanbase as "Rainboob Dash").

Created by the deviantART user Super-Rainbow-Dash-Z and inspired by Super Sonic, Super Rainbow Dash is a fanonical concept of Rainbow Dash having undergone a super-powered transformation. In this form, her blue coat turns to white, her irises from raspberry to red, the cloud of her cutie mark from white to storm gray, her rainbow mane flares up (similar to Twilight Sparkle's mane in Feeling Pinkie Keen), and her Element of Loyalty necklace appears on her neck. Initially, she was the product of a Sonic crossover, but was later re-characterized by SRDZ in the fanfic, "Harmonic Spectrum", where Rainbow Dash unknowingly represents and transforms through all of the Elements of Harmony at once, the plot of which was based on the theories of an undisclosed user.[SR 1][SR 2][SR 3][SR 4]

Metal Rainbow Dash or also know as just Metal Dash is a robot doppelganger of Rainbow Dash, who usually appears in crossovers with the Sonic the Hedgehog video game series. Like the Metal Sonic character from that series, she is usually created by Doctor Eggman.

She appears as Rainbow Dash's rival in most fan works that feature her, which are almost always Sonic and My Little Pony Friendship is Magic crossovers.[MR 1] She also has her own ask pony blog.

In the episode, "Suited for Success," Rainbow Dash critiqued the dress Rarity made for her to wear at the Grand Galloping Gala by saying Rarity needed to make it 20% cooler. The fanbase took the quote to heart and it since has become a running gag to use variations of the phrase while critiquing something online. (I.E.-(Blank) would be 20% (blank)er if (blank).

A less common shipping, though prevalent nonetheless, is the "FlutterDash" ship, which is Rainbow Dash shipped with Fluttershy.[FF 5][FM 1] She is sometimes paired with a Wonderbolt, most commonly Soarin'[FF 6][FF 7] or Spitfire. In some cases, she is depicted as having foals with Soarin'.[FA 1][FA 2] Thunderlane is also another pony she is commonly paired with. There is also a deviantArt group dedicated to the pairing of Twilight and Rainbow Dash(TwiDash or Rainbowsparkle).

The prevalence of lesbian pairings with Rainbow Dash, and the prevalence of the widely-accepted fanon "understanding" that she is a lesbian in general (partially due to her hexachromatic mane, being the color scheme for lesbians), has resulted in at least one parody of the concept, Five's Company: There, Rainbow is pursued by all five of her Ponyville friends and turns out to be the only mare to not have homosexual or bisexual tendencies. In that story, as in some others (like The Birds and the Bees), Dash is characterized as completely clueless about sex. The story Skittles inverts that idea.

Lauren Faust has stated that Rainbow Dash and Scootaloo are not related in any way; however, this has not stopped fans from having Rainbow adopt Scootaloo in some cases.

The fan fiction Mommy Nearest, and its continuation, Alicorn, cast Celestia as Rainbow Dash's mother. Celestia explains the reasoning for not admitting to being Dash's mother: having been born a Pegasus instead of a unicorn, Rainbow would not be accepted by the Court of Canterlot. So she gives Dash to an older Pegasus couple who had wanted a foal for many years. At the end of the fic, Celestia implies that Pinkie's father is, in fact, who impregnated her with Rainbow Dash. 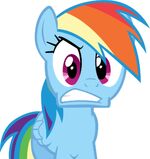