Start a Wiki
Queen Chrysalis, or just Chrysalis, is the queen of the changelings, a race introduced to the show in the two-part A Canterlot Wedding episode.

Chrysalis is often tied with Discord as the best villain of the series. Ever since Discord was reformed, some have removed him from the list. At the end of her episode, Chrysalis is sent flying away from Canterlot, basically over the edge of a mountain, and seemingly unable to use her wings from the force of Shining Armor and Cadance's attack. Although this should kill her, many fans loved her too much to want to consider that possibility for her; others believe she could recover with her wings (although such a feat could require being faster than Rainbow Dash, given a scene in Applebuck Season). For these reasons, there is much fan fiction of her return. In addition, the first arc of the IDW comics depicts her return as well, surviving her fall with resistance similar to Team Rocket from Pokemon (who are parodied in her fall), or the Joker from Batman.

She has been received quite enthusiastically by the fan community. For instance, fan art of her changeling form was posted online less than an hour after the episode aired[FA 1], and dominated the first couple of Drawfriend posts on Equestria Daily. A few of these artworks make fun of the holes in Chrysalis' legs, saying they consist of Swiss cheese or drawing similarly "cheesy" connections.[FA 2][FA 3][FA 4][FA 5][FA 6]

Within two days of the episode's airing, over 40 stories on FiMFiction had incorporated her as a character or started to be published that revolved entirely around her. That number grew to almost 200 by May 27, 2012.

Several of these stories have Luna and Celestia face off against Chrysalis (again).[FF 1][FF 2][FF 3][FF 4]

A number of fanfictions (the most popular of which is Transcend by Anonymous Pegasus) ship Chrysalis with original characters who turn out to bring out redeeming qualities in her.[FF 5][FF 6] They tend to depict Chrysalis growing from an evil love-eating parasite who desires only to regain her strength to developing a true sense of love for her new acquaintance.

The story The Dragon and the Changeling ships Chrysalis with Spike.

In other situations, she is shipped with Shining Armor, including stories set before and after A Canterlot Wedding - Part 2.[citation needed]

In FluffyMixer's videos about Fluffle Puff, the character is often seen in a relationship with Chrysalis.

Some fanfictions explore Chrysalis' extended family and her relationships with them. One fanfiction, Maternal Instinct, introduces her daughter and heir, Crown Princess Pupa, whom tragically, through generations of royal intermarriage, is both severely mentally and physically disabled.

In some fanfiction she gives birth to a baby changeling that is the result of her and Shining Armor mating when she was disguised as Cadence, she then drops the foal off at Shining Armor for various reasons, the most notable are as follows:The Foal in the Basket, My Son is a Changeling and You are the Father!

It is fairly common for her to have had a tumultuous relationship with her Mother (usually the previous changeling queen), and many fics mention or imply that she killed her mother in order to become Queen. 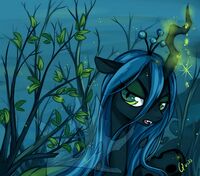 Retrieved from "https://mlpfanart.fandom.com/wiki/Queen_Chrysalis?oldid=79625"
Community content is available under CC-BY-SA unless otherwise noted.