My Little Pony Fan Labor Wiki
Register
Don't have an account?
Sign In
Advertisement
in: Articles in need of expert attention, Candidates for the Workshop, Pages that need improvement,
and 2 more

Princess Erroria is a female filly with a vanilla coat, wisteria mane and tail, and blue irises, and appears on the show as four different kinds of pony, including as an alicorn in the episode Lesson Zero. Almost a year and a half after the episode aired, an anonymous poster started a thread on 4chan's /mlp/ imageboard, asking "What should we call her?" She was renamed Princess Animatia Erroria, due to being an animation error, and because all the other alicorns on the show are princesses.[1] The name was voted as the character's placeholder name on the Friendship is Magic Wiki a few days later. Before Princess Erroria was chosen as her placeholder name, her placeholder name was Alula.

Princess Erroria is usually shown to be childish and happy-go-lucky. As her cutie mark suggests, it is implied that her special talent is DDoSing, or simply causing errors wherever she goes, whether it be inadvertent or at the discretion of those who portray her.

Her pet is the Pokémon Slowpoke, as an in-joke due to the fact that it had been over 2 seasons since her debut, and has only recently been recognized.

Also attributed to her is the Banana Sundae Pony, who is similar in many ways to DC Comic's Batman, with a striking resemblance to DC's Doctor Fate.[citation needed] 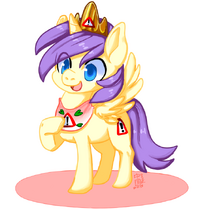