Princess Celestia is the supreme ruler of Equestria prior to the pilot episode of My Little Pony Friendship is Magic, and co-ruler later on. While she has only prominently appeared a handful of times, she plays an important role as Twilight's mentor and the recipient of her weekly moral lessons. This has led to a number of assumptions and memes surrounding Celestia.

As of October 26, 2011, she appears in more stories published on FIMFiction than any other of the supporting characters from the show. In fan art set before Luna's banishment, Celestia's mane is typically colored uniformly pink, a reference to her appearance in the storybook Twilight reads in Friendship is Magic, part 1.

Reflecting her status in the show as an immortal and semi-divine being, humanized and anthropomorphized fanarts of Celestia tend to depict her as tall and statuesque with goddess-like proportions and beauty. Fan arts that depict her as especially voluptuous have been named "Princess Breastia" by the fanbase.

One of the earliest pony memes, Trollestia casts Celestia's actions in the show in a different light. Like an internet troll, some of her lessons to Twilight Sparkle seem needlessly complicated, prankish and prone to spark disharmony. For instance, in The Ticket Master she sends only two tickets to the Grand Galloping Gala to Twilight Sparkle despite the fact that she knows her student has five friends; predictably, the ponies end up fighting over who gets to attend and who will have to stay home, until Celestia relents and invites all of them. A later episode reveals that she did so in the hope that the Ponyville ponies would lighten up the stiff gala, which they do, in a fashion: one instigates a food fight, one destroys the ballroom, and one causes a stampede of animals. Celestia approves.

This prankish nature of Celestia is commonly depicted in fan labor, particularly in short-form fiction like comics.

This meme occasionally overlaps with the previous one. Because Celestia banishing her own sister to the moon for a thousand years seemed rather harsh to some fans, and because it seems strange that one person could hold on to power for at least that long, a common motif in fanfics and comics depicts Celestia as a Stalin-like tyrant who banishes ponies who disagree with her to the moon, often using the phrase "to the moon", or turns them into stone statues in her garden. Her stern likeness on her Equestria Election poster plays with this idea, as do numerous pieces of fan art and comics that recontextualize Luna's rebellion as a democratic uprising ("New Lunar Republic") against a tyrannical regime ("Solar Empire"); for example, propaganda posters, and a parody fanfic.

A prime example of this meme is Friendship is Betrayal, in which Celestia has garnered a life-long hatred from Twilight Sparkle for fooling her into believing her parents were dead after being transformed into potted plants, using a sequence of stills from The Cutie Mark Chronicles.

A milder spinoff of the tyrant Celestia trope appears in both of HeyLasFas's rock operas, Nightfall and Destiny: A Tale of Unicorn Wings. She is still a benevolent and beloved ruler, but she is also deeply flawed, and her naivety towards her own need for control causes her to fill an antagonistic but not villainous role in both works. In Nightfall she's plays the role of the protagonist, but is a bit a of an anti-hero. Her negligent abuse towards Luna causes her to leave her throne and eventually turn into Nightmare Moon. While Celestia is a hero and defeats Nightmare Moon, she accidentally mortally wounds Luna and comes to the epiphany that it was her own lust for power that caused this to happen, not Luna's. Even though Celestia is repentant, she remains flawed and forgets about Luna as she relishes in her power. In Destiny she directly plays the role of the antagonist, controlling Twilight and separating her from her friends in an attempt to get her to focus on her royal duties and fill her destiny as her successor. This eventually leads to Twilight turning into Silent Dusk in parallel to Nightmare Moon, though in the end Twilight returns to normal and Celestia allows her to return to her friends.

A meme that depicts Celestia as having an obsessive hunger for cakes and/or other pastries and sweets as inspired by depictions of her in Ponyville Confidential and MMMystery on the Friendship Express; sometimes to the point that she openly steals them or seeks violent reprisal against those that steal or otherwise ruin hers.

Another common portrayal of Celestia dubbed "Molestia" is of her flirting and/or having sexual intercourse with other characters in the show to a comedic extent. It is less commonly seen in shipping due to how highly exaggerated it is. When portrayed as Molestia, Celestia is sometimes seen with an all-pink mane as seen in the storybook in the episode "Friendship is Magic Part 1" as well as sometimes bobbing her head to appropriated music as a nod to EzeCoyote's "Molestia is Excited". "Ask Princess Molestia" has been a prominent ask pony blog.

One of the gags hidden on the Pony Countdown website is that a click on Celestia changes the background image to a lunar landscape.

The only commonplace shipping involving Celestia is Twilight and Celestia, which is dubbed "Twilestia".[TC 1][TC 2] Another common item is to have Twilight become a relative of Celestia. Prior to The Cutie Mark Chronicles, this was by adoption or nature. The main difference afterward is acknowledgement of the parents shown in that episode as having raised Twilight for most of her life. Another method is becoming an in-law by Twilight wedding Luna.[specify] A more popular pairing involves Celestia and Discord otherwise known as "Celestcord" or less commonly "Dislestia".[CD 1][CD 2][CD 3][CD 4][CD 5]. Celestia is also sometimes portrayed as being Twilight's real mother.[specify]

A less-commonplace pairing is the incestuous 'Princest', which pairs Celestia with her sister Princess Luna. At least two pieces of fan-art also involve the two as sharing a lucky pony: one with Twilight in a sauna, another with the sisters waking up to find they had spent the night with Derpy.

The last concept of Celestia's 'relationships' would be random flings with her guards. "It's not like I'm being subtle. I've got more eye candy that a Bond villain."[RG 1] 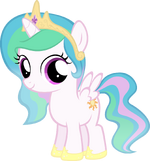