Pinkie Pie is a pink-coated, pink-maned Earth pony and one of the main characters of My Little Pony Friendship is Magic, in which she represents the element of laughter. Her cutie mark is of two blue balloons and one yellow balloon.

In fan labor, she is often used for comic relief, a unique perspective on things, and as a way to get around plot holes without eliciting cries of deus ex machina. She is a versatile tool, but one that must be used carefully. Because of her off-the-wall personality and behavior in the show, she is commonly seen as the hardest member of the Mane 6 to write.

As mentioned above, Pinkie Pie's most frequent role in fan labor is as comic relief, injecting a dose of comedy into situations that may or may not call for it. Occasionally, fan labor will delve more deeply into Pinkie Pie's character and psyche, giving her character more layers than is typically shown in the cartoon.

Pinkie has a tendency to ignore the laws of physics in the show, but it's taken much further in fan works. Numerous pictures and comics exist wherein Pinkie breaks the fourth wall or interacts with the comic panels, camera, and even the tools used to draw her.[FA 1][FA 2] In fiction, she can often be heard to rant about being followed by an invisible camera or pause to make sure the reader is well aware of what the current conversation is implying, always to the confusion of the other characters.[FF 1][FF 2] The more comedic and random the fiction, the more likely Pinkie is to overtly break the fourth wall.

Pinkie Pie's depiction in humanized and anthropomorphized fan art varies the most among the entire Mane 6 with different artists portraying her as average, chubby, or exceptionally curvaceous (the latter of which is sometimes referred to as "Pinkie Pies" by the fanbase).

The infamous fan fiction Cupcakes introduced the possibility of Pinkie becoming a murdering psychopath. Her behavior in Party of One after convincing herself that her friends had abandoned her gave this psycho-Pie a freaky, straight-haired exterior to match the interior. Pictures of murderous Pinkie are far more likely to include the straightened mane and tail and insane grin than the curly-maned look.[FN 1] She is also known in the Crooked Trees blogs as "Pinkamina" or "Pinky". Her psychotic persona has also been christened "Worst Pony"[1] by a number of fans, likely for being so grossly out-of-character.

Apart from being a separate being, Pinkamena is at times depicted as an alternate personality/mental voice of Pinkie herself[FN 2] Sometimes, an explanation for the disorder is given, a typical one being a severe mental scarring in the past.[FN 3] Some authors elaborate on this matter further and add other personalities, such as "Kinky Pie", who is similar to Princess Molestia.[FF 3]

Outside of grimdark and sticking closer to canon, the straight hair and dulled colors is used to indicate depression in the normally cheerful party pony. Extreme turns for the worse, temporary abandonment, or even seeing others in distress can deflate Pinkie Pie's mane.

"And that's how Equestria was made!"

Derived from Pinkie Pie's cutie mark story in The Cutie Mark Chronicles, some fan labor toys with the concept that Pinkie Pie somehow played a role in the creation/foundation of Equestria. Others joke that Pinkie would end a story of how Equestria was created with "...and that's how I got my cutie mark!"

"I never leave home without my party cannon!"
— Pinkie Pie in Sweet and Elite

In the episode Sweet and Elite, Pinkie Pie introduces her "party cannon", a cannon that shoots confetti and other party props. It appears again in A Canterlot Wedding - Part 2, Games Ponies Play, and Pinkie Pride.

Since its introduction, the party cannon quickly garnered popularity within the fandom, resulting in numerous pieces of fan art and exploitables. Some fan art depict it as being functional as a weapon (as it is used in A Canterlot Wedding - Part 2) or alter its design to more closely resemble an actual weapon.[FA 3] Variations of the party cannon include the Pinkie Pie Launcher and Vinyl Scratch's bass cannon.

Pinkie Pie is also featured in some fan art alongside (or crossed over with) Deadpool of Marvel Comics, due to their similarities: both are motor mouths, wild cards, and have a tendency to break the fourth wall.[FA 4]

Memes based on Five Nights at Freddy's feature Pinkie Pie, Fluttershy, Twilight Sparkle, and Rainbow Dash as animatronics and either Rarity or Applejack as the night guards.[citation needed]

The Dr. Jekyll and Mr. Hyde/Mlp crossover became popular after Ink Potts released a trilogy of animatics on Youtube, each featuring Pinkie Pie as Dr. Jekyll and her dark counterpart Pinkamena as Mr. Hyde (renamed "Dr. Pinkie and Miss Pie" to fit the character appropriately). From these animatics alone spawned much fan art[FA 5][FA 6][FA 7][FA 8], an unfinished fanfiction[FF 4], and even a series of comics drawn by demon-variola.[FA 9]

Among the rest of the Mane 6, Pinkie Pie is most commonly shipped with Rainbow Dash, Fluttershy, or Twilight Sparkle.[FF 5] These pairings are typically referred to as "PinkieDash", "PinkieShy" (or "FlutterPie"), and "TwiPie" respectively. As of the episode Pinkie Apple Pie, Pinkie Pie and Applejack -- "ApplePie" -- has also become a popular ship.

Though it is very uncommon, Pinkie Pie is occasionally shipped with her alter ego, Pinkamena.[FA 14][FA 15] Dubbed "PinkieMena", this coupling basically pairs the pink party pony with her own (but darker) self.

Pinkie Pie has also been known to be shipped with Doctor Whooves and even Discord.[FA 16] 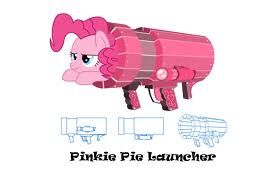 Retrieved from "https://mlpfanart.fandom.com/wiki/Pinkie_Pie?oldid=93091"
Community content is available under CC-BY-SA unless otherwise noted.