On a Cross and Arrow is a fan fiction written by Conner Cogwork, based off of and inspired by the Genderswap works of Trotsworth.

While trying to cast a long distance teleportation spell for a trip, Twilight Sparkle accidentally sends herself and her friends to another dimension where everypony is the opposite gender of the ponies back in their own dimension. The girls try desperately to get back home while trying to avoid their male-counterparts.

Part 1: On a Word Misheard

Part 2: Out of the Mouths of Babes

Part 3: Of a Fruit Forbidden

Part 4: Upon a Wing and a Prayer

Part 5: With a Finger Crossed

Part 6: Through a Stitch in Time

Part 7: In my Beautiful Balloon

Part 8: Over the Hills

Part 9: Under a Midnight Star

Part 10: Across the Horizon

The following characters are all gender-swapped counterparts to characters in My Little Pony Friendship is Magic, virtually identical to the original with some distinctions.

The gender-swapped version of Twilight Sparkle. Like his female counterpart, he has a powerful thirst for knowledge and is shown to be very intuitive and a quick thinker. When he gets to know his filly self better, he comes to think of her as the sister he never had, and vice versa. (It should be noted that On a Cross and Arrow was written before the premiere of A Canterlot Wedding and the introduction of Shining Armor.) It's suggested that Dusk has a crush on Applejack's older sister Red Gala and is equally intrigued by the thought of a female Prince Solaris.

The gender-swapped version of the female cowpony of the same name. Not an exact mirror-image of the filly Applejack, he more closely resembles Big McIntosh, even sharing his signature yoke. Like "Cousin JayJay's" tendency to refer to friends as "sugarcube", male Applejack refers to friends as "haystack". He's just as protective of family as his other self, and seems to have developed a crush on Rainbow Dash toward the end of the story.

The gender-swapped version of Rainbow Dash. True to being Dash's male self, he shares many of her traits and hobbies, including a love of taking afternoon naps and—if issues of Playpony in his bedroom are any indication—secretly being bi-curious. He is, however, shown to be somewhat more athletic (as evidenced by his success at performing a double rainboom before Dash) and impulsive (having no qualms about demolishing his own house to flush Dash out of hiding). Blitz initially expresses interest in the female Applejack, but ultimately confesses his love to Rainbow Dash. Occasionally refers to friends as "brony".

The gender-swapped version of Rarity. Ponyville's resident fashion designer, he shares his female counterpart's appreciation of beauty, refined vocabulary, and penchant for the overdramatic. Occasionally called "Lucy" for short by his friends, Elusive is apparently often teased for being "girly" and "frou-frou". His relationship with Rarity is instantly that of romantic—he very well considers her to be the mare of his dreams, even after discovering who she is. Like Rarity's own Opalescence, Elusive has a pet cat named Alexanderite.

The gender-swapped version of Fluttershy, and is every bit the sensitive, timid animal lover she is. Like Elusive and Rarity, his and Fluttershy's relationship is of a romantic sort—he falls in love with her almost as soon as he meets her. Like Fluttershy's own Angel, Butterscotch's most prominent animal companion is a white bunny named Angela.

The gender-swapped version of Pinkie Pie. Full name: Berriswainer DaVinci Bubble. He's just as outgoing, optimistic, and hyperactive as his female counterpart. In true alternate universe fashion, he has his own version of the Pinkie Promise (the Berry Bubble Swear) and the Pinkie Sense (the Berry Sense), though both work the same as their respective originals. Berry has just as much a reputation in his universe as Pinkie has in hers that the mere thought of the two of them sharing one plane of existence utterly terrifies some of their friends.

The gender-swapped version of Spike, and as such, Dusk Shine's best friend and number-one assistant. As the only female in Dusk's circle of friends, she relishes the brief time spent playing with Pinkie Pie and Fluttershy. Spines is shown to have just as deep a crush on Elusive as Spike has on Rarity (thus harboring some jealousy toward the unicorn mare), but the thought of meeting her other self Spike does intrigue her a little. Like Rainbow Blitz, she occasionally refers to her friends as "brony".

The gender-swapped version of Apple Bloom, the stallion Applejack's younger brother, and a member of the Cutie Mark Crusaders. Instead of a large red bow, he wears a backwards-pointed baseball cap. In the short time he knows the filly Applejack, he grows considerably close to her. In the sequel story On a Whisper of Wind, Applebuck is the main character.

The gender-swapped version of Sweetie Belle, Elusive's younger brother, and a member of the Cutie Mark Crusaders. Like Applebuck, he grows close to his older brother's female self—especially after she makes his favorite meal.

The gender-swapped version of Scootaloo and a member of the Cutie Mark Crusaders. He idolizes Rainbow Blitz as much as Scootaloo does Rainbow Dash, even harboring a desire for the stallion to be his teacher.

The gender-swapped version of Princess Celestia, and Dusk Shine's mentor. He naturally holds his student in high regard, and seems equally impressed by Twilight Sparkle's magical talent. Dialogue between him and Celestia suggests the two of them have a risqué history.

The gender-swapped version of Princess Luna, mentioned by Prince Solaris but not shown. Just like Luna, he too nearly shrouded Equestria in eternal night as "Anarchy Apollo".

The gender-swapped version of Lyra, and one of the first stallions Twilight and her friends meet upon arriving in Dusk Shine's universe. He and Babar appear to be in a relationship.

The gender-swapped version of BonBon, and one of the first stallions Twilight and her friends meet upon arriving in Dusk Shine's universe. He and Harpsy appear to be in a relationship.

The gender-swapped version of Big McIntosh, mentioned by Applebuck but not shown. According to male Applejack, she bears a bit of a resemblance to female Applejack but is a little taller.

The gender-swapped version of Granny Smith, mentioned by Applebuck but not shown.

The gender-swapped version of Prince Blueblood, mentioned by Elusive but not shown. Dialogue suggests she's every bit as pompous and a royal pain as her male counterpart.

The gender-swapped version of Derpy Hooves/Ditzy Doo. His appearance is very brief, but it establishes one thing perfectly clear: he loves muffins.

The gender-swapped version of Zecora, mentioned by Dusk Shine but not shown.

On a Whisper of Wind

On a Whisper of Wind is the currently-in-progress sequel story to On a Cross and Arrow, with Applebuck as the main character. Out of a desperate desire to be with his "Cousin JayJay", Applebuck, with the help of the Great and Powerful Presto, is transported to the Mane Six's universe, where he meets and befriends the filly Cutie Mark Crusaders.

On a Cross and Arrow: Dual Reality

On a Cross and Arrow: Dual Reality is a audio series created by TheHeolix which focuses on the six main characters and their genderswap versions.

Episode 0A, Zomponies?!: Dusk Shine researches zombie ponies, making mention to his friends about Applebuck's story about a village in the Everfree Forest.

Episode 0B, Surprise! Surprise!: Twilight Sparkle, Dusk Shine, and the rest of their friends put together a surprise party for Princess Celestia.

Episode 0D, Peaceful, Peaceful Ponyville: The "Male Six" are enjoying a peaceful day in Ponyville, but somepony interrupts them with his uncontrollable yelling. 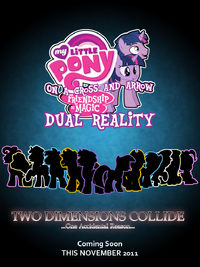 On a Cross and Arrow image gallery
Other gender switch art

Retrieved from "https://mlpfanart.fandom.com/wiki/On_a_Cross_and_Arrow?oldid=75001"
Community content is available under CC-BY-SA unless otherwise noted.