Octavia is the fan name given to a dark gray earth pony who appeared in The Best Night Ever. In that episode she is part of the band that provides music for the Grand Galloping Gala, and plays a cello. Though she has no dialogue, her cultured look and expressions won her a great deal of notice from fans. She also appeared as one of the musicians performing at the Garden Party in Sweet and Elite. In fanmade videos, she often talks with a British accent.

Octavia stands out by virtue of being an earth pony capable of playing the double bass or cello. She's normally a cultured, sophisticated pony who enjoys classical music and is often placed in juxtaposition to Vinyl Scratch and her wild hip-hop personality. Vinyl usually tries to get "Octy" to lighten up, if she's not hating on Octavia's music preferences, and the pair usually develop some kind of friendship if they ever meet in a story. Due to her nickname "Octy", she is occasionally depicted as an octopus with a pony face in fan art, sometimes in conjunction with "Seapony Lyra".

Due to a similarity in coloring, she is sometimes taken as one of Pinkie Pie's sisters. As mentioned above, she is usually portrayed as friend, roommate, or romantic partner to Vinyl Scratch. Epic Wub Time, for instance, sees them merely as flat mates, while Beethoofen Virus ships them explicitly. My Roommate is a Vampire portrays both these things.

She is also commonly shipped with other musicians in the show, such as the ponies performing with her in the episodes The Best Night Ever and Sweet and Elite like Frederic Horseshoepin in the fan fiction This Nearly Was Mine. These are far less common than her shippings with Vinyl Scratch, and are usually used in stories where the two mares are specifically not shipped together.[citation needed]

When her childhood is portrayed, her parents are frequently depicted as strict and forcing Octavia to learn an instrument.[FF 1][FF 2][FF 3] A humorous take on that concept is shown in the short comic A slice of life: Octavia by Dreatos.

At least two people claim to have come up with the name "Octavia" independently.[1][2]

Hasbro has since confirmed her name as Octavia Melody. On the 27th of Hasbro's series of 84 collector's cards, Octavia was featured with DJ Pon-3, with the description, "DJ Pon-3 and Octavia may both be at the top of their musical games, but their careers are very, very different! You can find Octavia at garden parties and galas performing prim and proper classical music on her cello. On the other hoof, DJ Pon-3 feels at home behind her turntables, laying down sick beats and wearing her trademark sunglasses. Are these two bitter rivals, or are they long-time friends? Will they ever perform a duet? Only time will tell!"

Within the fandom, there is much debate over whether the instrument Octavia plays is a cello or a double bass, with those arguing it's a double bass pointing out that cello is usually played sitting down, and those arguing it's a cello pointing to official sources calling it as such, such as the official trading card, Jayson Thiessen (the show's director),[3] and William Anderson.[4][citation needed] 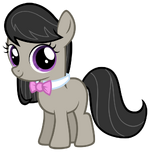 Retrieved from "https://mlpfanart.fandom.com/wiki/Octavia?oldid=89005"
Community content is available under CC-BY-SA unless otherwise noted.