Neon Lights, also commonly known as MC W1SH, is a fan-named background pony made various appearances in the the show since Season 2. Another name, Rising Star, is used in the Enterplay collectible trading card game.

Neon is often depicted as a light show designer at nightclubs. He is often paired romantically with the wild record-spinning DJ, Vinyl Scratch. Both are often seen working along side one another in fan works, and the fandom thinks they are attracted to one another due to being admirers of each other's works. The two often share the same interests and personality in fan labor.[citation needed]

Fan art has been posted of shipping between Neon Lights and Vinyl Scratch. ShadyVox, Nowacking, and BreeFaithVA started an album song starring Neon Lights, Vinyl Scratch, and Pinkie Pie, called Pony Rock Anthem, based on the LMFAO song, Party Rock Anthem.[1] Addtionally, there is a flash animation featuring the two ponies together.[2]

The earliest clue of their relationship came from the comic Mixoff Battle by PluckyNinja on deviantArt. The two were meant to face each other off in a fierce rivalry match between Neon's dazzling lights and Vinyl's hypnotic beats. While preparing on stage, they had a chance to talk that they don't really hate each other, but happen to be fans. They shared compliments of the other's work and thinking they would never be half the musician as the other. Then Vinyl got an idea that they should combine Neon's light presentations with her musical beats. Realizing that they have a lot in common, the two became immediately attracted to each other and start making out on stage (long enough to miss their cue).[3]

The pair shared a spot in a fanmade YouTube video created by TheLivingTombstone called Vinyl and Neon. In the video, they are good friends pretending to be rivals. But through a slip-of-the-tongue, they admit they are pretty close.[4]

Neon Lights has also appeared in the JanAnimations short Bar Buddies, in which he argues with Button Mash (also voiced by ShadyVox) over their music videos. 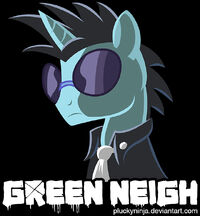