My Little Pony: Rise of the Clockwork Stallions

My Little Pony: Rise of the Clockwork Stallions is a My Little Pony: Friendship is Magic platform genre fangame features multiple playable characters, starting as Twilight Sparkle, as she needs to recruits and rescues her friends from the Clockwork Stallion's robot army that invades Equestria, she must go from Ponyville to various locations, and finally, to Canterlot to defeat the main villain.

The game is finished in late 2013, the DX version is an extended version, released in 2015, featuring new world, Crystal Empire, where it is accessible by obtaining all big gem "Crown jewels" hidden each of the levels, it also unlocks alicorn mode. Note that even the Crystal Empire has hidden gems as well, but they are optional.

Cypherus Clockwork, a unicorn who's special talent is robotics, spent years building these machines in a secret location, he finally creates one that is the pinnacle of his robot creations, Quantis. He can think freely, make it's own choices, and learn.

That leads to Cypherus's demise and to the creation of the Clockwork army. Quantis considers the ponies of Equestria a plague that needs wiped clean, with all their imperfections and feelings. So, he sets out with his army to destroy the world, and is defeated by the elements of harmony, wielded by the Princesses.

Banished to a placed called the void. For hundreds of years, Quantis uses the parts of his army to construct a machine, capable of replicating the Princesses spell. So that he can return to Equestria and finish what he's started.

After successfully replicating the spell, the Clockworks find themselves in an alternate Equestria deemed, Altestria. The army sweeps through the world and claims it for their own, leaving it in ruins. Quantis, however isn't satisfied with the conquest of Altestria, and begins reconstructing his portal device. The new portal device is able to send him and his army to Equestria.

The Clockwork Army swarms Equestria within a matter of hours. They separate the mane six, to avoid the Elements of Harmony being used on them again, and capture Canterlot. Twilight Sparkle is the only one of the mane six that escapes the Clockwork's grasps and is now tasked with freeing her friends and taking down the shield that now surrounds Canterlot.

My Little Pony: Rise of the Clockwork Stallions is a non-profit fan made labor backed by a large team of people. The team has been hard at work on the title since May 10th, 2012.

The object of the game is to collect keys while defeating the robots who have taken Twilight Sparkle's friends hostage after separating them so they are unable to use the Elements of Harmony. The keys are needed to drop the shield surrounding Canterlot and rescue the princesses who are trapped inside, and save Equestria.

In DX version, after you cleared 100% everything, you'll unlock Crystal Empire, save it from King Sombra.

My Little Pony: Rise of the Clockwork Stallions is a platform game that draws a lot of it's inspiration from the Mega Man/Mario/Sonic franchises. Many of the in-game elements are borrowed from the two. Such as:

The map screen is where the player will travel from level to level. From the map screen the player can select a level, go to the store, edit his/her options, upload their highscore, play bonus levels, and save their game.

The map style is inspired by Super Mario World having many of the same elements. 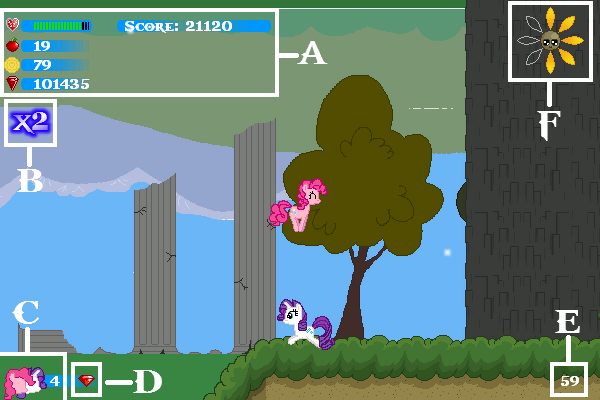 The in-game screen shows the player a variety of different things that are key.

My Little Pony: Rise of the Clockwork Stallions features a vast world to explore.

There are 8 worlds in total, each world containing 6 levels, a mini-boss, a big boss, and a number of hidden levels/secrets. (Some may be tricky as some hidden levels disrepect the visible paths)

The worlds are, in order of appearance:

All Crown Jewels guide by Wissle (based on 2013's game version, some jewels locations may changed a bit in DX version)