My Little Investigations is a video game developed by Equestrian Dreamers based on My Little Pony Friendship is Magic. It is an adventure/mystery game that features gameplay inspired by Capcom's Ace Attorney Investigations: Miles Edgeworth. In the game, players assume the role of Twilight Sparkle as she investigates crimes in Equestria.

On April 15, 2019, further development on the game was cancelled due to project staff turnover and positions unable to be completely filled, with Case 2 left unfinished and the assets for said case being made publicly available.[1]

The game was originally programmed in C# using Microsoft XNA, but development later shifted to Java[2] to allow for game functionality on Mac and Linux machines. As of the second demo, development has shifted to C++.[3]

Initially, three gameplay elements unique to My Little Investigations were to be implemented in the final version: confrontations, partners, and testimonial evidence. However, the testimonial evidence concept was cut due to its impracticality and the possibility of complicating the evidence-locating process.[4]

The game's cases are to be released episodically. Following the first case's release, the development team has plans to release a case editor to allow for fan-created content.[5]

Much like the game upon which it is based, My Little Investigations is a "point-and-click" adventure, with the player controlling Twilight's movements and who or what she interacts with. For each case, the objective is to determine who the true perpetrator of the crime is; the player will sometimes be made aware of who the true perpetrator is, in which case their objective is to prove it.

During investigation phases, the player collects evidence from the crime scene and surrounding areas, as well as profiles of characters related to the case. Talking to other characters during "character encounters"[8] about the case and collected evidence can also yield additional evidence or update acquired evidence and profiles with new facts.

During interrogation, the player questions other characters about the results of the investigation or giving testimony. These sessions can lead to new information about the case. The player can press the witness for more information or present evidence that contradicts the statement being made.

Interrogations can be conducted at any given time, even if the player does not have the right evidence to advance. Confrontations, however, only open when the player has collected all the evidence required to see them through.

A game mechanic intended to set My Little Investigations apart from the game it is based on is its use of "partners".[10] During the game, the player will occasionally take another character on as a temporary partner to assist with the case. Each partner has a "passive ability" and "active ability" with which to assist the player during investigations and interrogations, from coercing a less-than-talkative witness to speak to helping locate hard-to-find evidence.

"Just a minute!"
— Twilight Sparkle's version of "Hold it!"

Case 2 background (no information given) 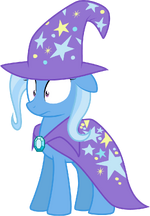