Chronologically, the series takes place after season four of My Little Pony and the fifth Ace Attorney game Dual Destinies. Like Turnabout Storm, Elements of Justice takes after the Ace Attorney series' visual novel style and incorporates original character sprites and voice acting. Aside from the prospective video format, the creator is also making the series available in text format.

Elements of Justice is set to be comprised of five cases: "Turnabout Theatre", "Crusading for a Turnabout", "Turnabout Discharge", "A Turnabout for Brotherhood" and "The Turnabouts of Friendship". Turnabout Storm creator NeoArtimus is not involved with the sequel but has wished TheAljavis good luck with his project.

Phoenix and his friends will join Twilight and her friends as they defend the innocent ponies who were framed, and try to solve the mystery of why more and more murders have been occurring in the land of Equestria. Could it be a coincidence, or is there a dark entity looming around these murders?

Case 2: Crusading for a Turnabout

Episode 1 of Bonds of Justice, titled Messages and written by PrettyPegasusWings, premiered on December 12, 2021. It focuses on Coco Pommel and explores her relationship with Overall Concept (the case victim in Turnabout Theatre) and coping with his death in a series of phone messages she left on his answering machine.

Episode 2, titled Rainbow Blues and written by EoJ's public relations writing team, premiered on April 16, 2022. It takes place between episodes 2-2 and 2-3 and focuses on Rainbow Dash airing her emotional frustrations at Phoenix over the development of Scootaloo's criminal arrest. 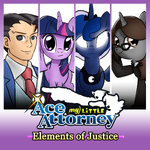 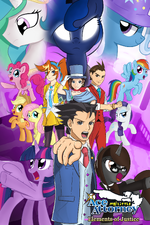