Lyra is a mint-green background pony with a lyre for a cutie mark. She is often seen with Bon Bon and is well-known for sitting like a human on a bench in the episode Dragonshy which has inspired multiple memes and character portrayals. It hasn't escaped many fans' notice that she shows up everywhere Twilight Sparkle goes, even Cloudsdale, though not redesigned as a Pegasus.

Lyra's appearance in Dragonshy has provided much of the basis for the character's portrayal. She is usually depicted as an oddball compared to other characters with an interest in humans. Numerous fan works depict her studying human culture as a scholar or attempting to prove their existence.[FF 1][FF 2]

Due to her cutie mark, she is often depicted as a musician.[FF 3] She occasionally appears alongside Vinyl Scratch and Octavia in this capacity.[FF 4]

Several episodes (like Fall Weather Friends and Swarm of the Century) showed Lyra and Bon Bon in close proximity; as a result, the two are commonly paired together in fan labor, frequently in romantic relationships but sometimes as just friends.[FF 5][FF 6][FF 7][FF 8] This pairing is typically called LyraBon.

The My Little Pony dog tags depict them together on a single tag. Slice of Life, the 100th episode which pays tribute to the fandom, depicted Lyra and Bon Bon as best friends.

After the episode Call of the Cutie introduced several new fillies, and because Lyra attended the cute-ceañera, some of these foals were taken to be children of Lyra's and Bon Bon's. The most enduring of these "fanon adoptions" is Tootsie Flute; fan art depicting the three as a family continues to be made, as of December 2011.

Another filly imagined to belong to the couple was Sweetie Belle.[FA 1] That particular piece of fanon was never widely accepted, however, and dashed entirely when the episode Stare Master confirmed Sweetie Belle as Rarity's sister. Some fans were disappointed with this development.[FA 2]

"I mean, I sit oddly one time to crack my back, and I get a reputation."
— Lyra, from Sepia Tock

Lyra has become the subject of a number of memes based on her appearance in Dragonshy:

"Seapony Lyra" was started by a picture of Lyra as a seapony, drawn by popular fandom artist johnjoseco. This fan art was inspired by the seaponies from G1.

A Lyra plush with a pocket in an obviously genital area launched a new meme in late May 2012. It involves one or more of these plushes used for various purposes, such as a pencil-sharpener, comfy shoes, or a wallet. The meme also extends to images of various people poking out of the hole. The original purpose of the plushie was to act as a sex toy for males. The plushie was sold on The Dealer's Den for the equivalent of $704 June 3, 2012.[FA 3][FA 4][FA 5][FA 6][FA 7]

A recolor of the Twilight Sparkle blindbag pony bears approximately the same color scheme and cutie mark as Lyra, but was named "Heartstrings" by Hasbro.[1]

This led to a lot of discussion within the fanbase about whether Lyra should be renamed Heartstrings, or have the name incorporated into her fanon name somehow. The argument for the name "Lyra Heartstrings" was put forward, as was the idea that the names of toys are not relevant to the show itself. Some fans also adopted a number of joke names, including "Fred" and "Incidental Unicorn #2" (both put forward by a layout artist working on the show, and the latter being the internal designation for that particular pony design) and "Harpass".

The issue has led to the production of some fan art, for instance, addressing the confusion resulting from the two names (as in this example from the webcomic And that's how Equestria was made), or showing a violent confrontation between "Lyra" and "Heartstrings" (as in these images by `Pyritie and FluffyWuffs), or just reaffirming the artist's preference of the original name (like here). A second toy of the pony was released in March 2012, this time bearing the name "Lyra Heartstrings". 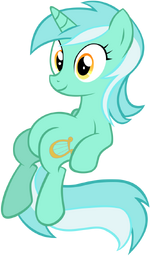