Lord Tirek is a male centaur, the brother of Scorpan, and one of the main antagonists of My Little Pony Friendship is Magic. He first appeared in the Season 4 two-part finale, Twilight's Kingdom. He is an evil Centaur who gain power by stealing magic. Prior to his appearance in G4, he was notable as the villain in Rescue at Midnight Castle from G1.

Tirek is generally depicted as evil, sadistic, and narcissistic. He is shown to be a skilled manipulator, even more so than Discord. He is often seen to associate compassion with weakness as a result of his brother's betrayal. In season nine, Tirek partners up with Queen Chrysalis and Cozy Glow in an attempt to conquer Equestria and defeat the ponies once and for all. However, their plans are foiled and they are turned to stone by the Mane Six.

Tirek began appearing in fanfiction long before the announcement of his appearance in Friendship is Magic. Interestingly, some of these works involve Tirek returning to power after coming back from being banished in Tartarus.[1][2]

Occasionally, Tirek is depicted reuniting with his brother, Scorpan, following the events of the season 4 finale.[3][4]

Other works, however, instead use Tirek as a plot device more than as a character. In these cases, Tirek has been defeated but lingering evil magic, in some way, leads to the conflict of the story.[5] 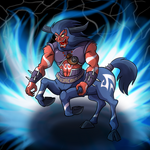 Retrieved from "https://mlpfanart.fandom.com/wiki/Lord_Tirek?oldid=93980"
Community content is available under CC-BY-SA unless otherwise noted.