Start a Wiki
Lightning Dust is a turquoise pegasus who acts as a foil to Rainbow Dash in Wonderbolts Academy. She loses her position in the Wonderbolt Academy after endangering others.

Numerous fanworks are based around Lightning Dust after the events of Wonderbolts Academy often trying to figure out what she did that got her kicked out of the Academy.[1] Some depict Rainbow Dash helping her to get back into the Academy.[2][3] Occasionally, fanworks go into what led Lightning Dust to make the decisions she made.[4][5] 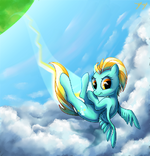 Retrieved from "https://mlpfanart.fandom.com/wiki/Lightning_Dust?oldid=63468"
Community content is available under CC-BY-SA unless otherwise noted.