CUUSOO is a Japanese partner of the LEGO Group. They work with the LEGO Group to produce community supported sets. CUUSOO and LEGO started working together in 2008. In October 2011, it was announced that anyone could upload a creation to lego.cuusoo.com, and if their creation receives enough (10,000) supporters, it will be reviewed by the LEGO Group for a chance to be made into an official LEGO product. The project is currently in open beta.

Background on the My Little Pony project

On February 29, 2012, CUUSOO user Addam posted a project on the CUUSOO website to create pony shaped minifigures (aka miniponies) based off the My Little Pony Friendship is Magic television show. Currently Addam has designed figures of the Mane Six as well as a few secondary characters including Big Macintosh,

Derpy Hooves, a changeling from the season 2 final, and Vinyl Scratch. Addam uses Karol Pawlinski’s downloadable 3D pony library for the headpiece, hair, and tail of the 3D models. Addam has stated that he was currently working on concepts for a few small sets, the first one made being Vinyl Scratch's turntable and loudspeakers. He has recently made mini models of Twilight's tree house, the Sweet Apple Acres barn, and Rainbow Dash's house.

On June 4, 2012, the Lego Review Stage for some achieved projects had been finished, and the two projects were rejected and then archived. This is what LEGO had to say:

"Decision on the IP's fit with the LEGO Brand

First and foremost, congratulations to Addam for gaining so many supporters for this very well done concept on LEGO CUUSOO. The work you have put into the concepts for potential LEGO renditions of My Little Pony figures and playsets is outstanding.

We know My Little Pony is very popular, and these concepts would make great products. Our team has done our due diligence. Since the property is owned by Hasbro we've decided it’s neither a brand fit nor a strategic fit for the LEGO Group to pursue a My Little Pony license, and so we will not consider My Little Pony projects on LEGO CUUSOO further. We see how enthusiastic and hopeful MLP fans are at the possibility of a LEGO line and are sorry to be the bearers of this disappointing news.

Since LEGO CUUSOO opens us to new product suggestions, naturally people will suggest concepts that aren’t a strategic fit. We are grateful for the spirit behind projects like the My Little Pony - Friendship is Magic project. It keeps us sharp and looking toward the future of the LEGO brick.

On March 15, 2012, when Addam's project reached 500 supporters, LEGO posted the following comment on the project’s page:

“Congratulatory message from LEGO for +500 votes

Congratulations on all of the supporters! Great job on the concept pony figurines, it's clear you've captured the look and feel of My Little Pony as a potential LEGO model.

With the popularity of the new show, it's clear people would want a LEGO tribute. Of course if this reaches 10,000, we'd have to secure a license. Until then, best of luck on your journey to 10,000 supporters!

Please understand that this initial green light does not have an effect on the LEGO Review that will take place if the project reaches 10,000 supporters. Until then, we wish you the best of luck on your journey to 10,000 supporters!

There has currently been no official response from Hasbro about the projects, however (according to conversations on twitter) Hasbro is now aware of them.

Are you ready to PARTY? 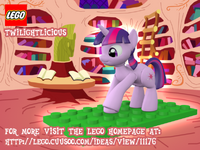 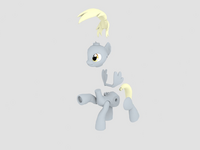 Version 1 Assembly (wing clip is part of back)