Besides creating the show itself, Lauren Faust has also drawn a number of unofficial sketches and created her own OC pony. A drawing of this pony was first published together with a September 2011 interview on Equestria Daily.[1] The fandom has shown much appreciation and consideration for the Alicorn.

The fandom has given the OC a number of nicknames; such as Lauren Faust, after her creator's name, Mother Mare,[2] Regal Mother,[3] Queen Faust,[4] Fausticorn,[5] Rosetta,[6] Harmony,[7] and even an unlikely Tau Sunflare.[8] Judging by the number of images returned from searching on Derpibooru, "Fausticorn" seems to be the most popular name aside from Lauren Faust.

The pony is often considered to be the mother of Princess Celestia, Princess Luna and Discord.[9][10] As their mother and ponysona of the creator, she is also considered to be the Goddess-Empress of Equestria. She is noticeably much larger and more slender than other ponies. A fanmade plush version of the pony was purchased by Lauren Faust herself.[11]

In the fanfics written by Storiesatrandom, starting with The tale of Writing Glory, she is renamed Writing Glory, and is portrayed as the adopted daughter of Celestia and adopted niece of Luna.

A common image motif is the Subway meme, showing her together with Subway sandwiches.[12][13] It originated as a humorous means of censoring unsavory images of the pony on Ponibooru and eventually spread to images of other ponies. 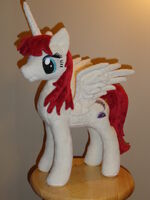 Retrieved from "https://mlpfanart.fandom.com/wiki/Lauren_Faust?oldid=76717"
Community content is available under CC-BY-SA unless otherwise noted.