King Sombra is a unicorn and a recurring antagonist in My Little Pony Friendship is Magic. He first appeared in the Season 3 two-part premiere The Crystal Empire, in which he is portrayed as the former tyrannical ruler of the Crystal Empire who is bend on reconquering it before his plans were thwarted by Princess Cadance, Spike, Shining Armor, The Mane Six, and the Crystal Ponies. He returned in the Season 9 two-part premiere The Beginning of the End, where he is portrayed as an egotistical and overconfident baddie who is more desperate than ever before. He destroyed the Tree and Elements of Harmony and briefly conquered Ponyville and Canterlot with his army of hypnotized slaves. He is defeated again by the Mane Six.

With what few lines and little time on-screen he had during his brief role and his fate is left undecided in the show, in most fan fiction Sombra is either dead or survives his ordeal, in which case he makes a surprising return to exact his revenge on the Mane Six, Celestia, and Luna, and tries to take over the Crystal Empire and ultimately Equestria. Very little fan labor portrays him as a hero or having redeeming qualities.

Another prominent theme revolves around the implications of the use of dark magic (and nefarious means in general), with Sombra as its prominent user and advocate. One depiction is Sombra's past, showing how he ended up as a dark wizard. Another is him interacting with Twilight, trying to seduce her into becoming his disciple and/or showing her that they are not so different after all.

After his appearance in Season 9, fans have written some fanfics where Sombra survived his defeat in the Season 9 premiere and plots revenge on the ponies. Other fanfics depicted alternate stories if Sombra did actually join "Grogar" and his Legion of Doom.

Initially, Sombra was not as well-received as most other Friendship is Magic villains, as many viewers were disappointed that very little was revealed about his character and that he didn't appear or speak as often as other villains. This has however been disputed by saying it adds to how malevolent and intimidating he is, and that it highlights his resemblance to Sauron of the Lord of the Rings series. King Sombra's character design has also been criticized by some fans, many calling it uninspired.[citation needed]

His popularity grew over time and he is now considered a fan-favorite villain to a couple of fans of the show. Sombra's reappearance in Season 9 has gathered generally positive reception from the fans as he finally has more dialogue, screentime, and has managed to almost beat the Mane Six by destroying the Tree and Elements of Harmony. However, his overconfidence and egotistical nature lead to his final downfall. His new voice actor, Alvin Sanders, received a mixed response, as many consider his voice too over the top and did not fit the character.[citation needed] Plus, his voice sounded nothing like he did in Season 3 when he had a deep growling ghost-like voice. This is countered by the fact that Jim Miller explained the differences between the two voices on Twitter. In Season 3, Miller voiced Sombra as a ghost-like figure, a not-fully formed being while his voice in Season 9 is his true fully formed voice.

In most fan fiction, he is shipped with Celestia, Luna, Queen Chrysalis, and in some cases Twilight Sparkle, as seen in stories such as Kiss of the Dark and His Black Heart's Inquiry.

Another popular shipping is with Trixie as several foals are based of of this paring, examples include Eclipse by Faith-Wolff and Starfall by Kilala97 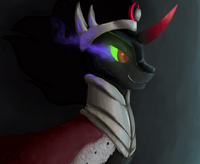 Retrieved from "https://mlpfanart.fandom.com/wiki/King_Sombra?oldid=93983"
Community content is available under CC-BY-SA unless otherwise noted.