Granny Smith is an elderly green Earth pony and the grandmother of Applejack, Apple Bloom and Big Macintosh. She lives alongside her grandchildren and the dog Winona at Sweet Apple Acres.

Granny Smith is often portrayed as an eccentric and quirky old mare while still being quite wise and knowledgeable. She is usually very forgetful and generally shares many characterizations with classical grandmother-figures. As she is quite old, she isn't shown to do much of the heavy labor on the farm, instead handling cooking and banking. According to the episode Family Appreciation Day, Granny Smith and her family were the first ponies to settle at the border of the Everfree Forest, thus being the founders of Ponyville. She is also credited with discovering the magical zap apples in the episode. Based off this episode, she has become a "storyteller" grandmother, often sharing stories of her past to teach a lesson to her grandchildren or to help them sort out moral or ethical questions in fan labor.

While Granny Smith rarely appears as the main character in fan fiction, she often appears as a supporting character in works featuring Applejack or her siblings. In romantic fiction starring the Apple siblings, she is sometimes seen to give advices or to fully support the relationship, while in others she can be more conservative, especially with homosexual pairings, in order to create conflict. Some stories sometimes have her die of old age and shows how the rest of the family moves on without her.

Granny Smith is almost always seen as the grandmother of Applejack, Apple Bloom and Big Macintosh. She is generally shown to have a strong bond to all of her grandchildren, giving them advice when needed and storytelling with them. It is widely believed that Granny Smith had a husband, thus the Apple sibling's grandfather, but neither he and their child(ren), Applejack's mom or dad, have been shown or mentioned in the show, with the possible exception of Aunt and Uncle Orange depending on which side of the family they are, and have created a lot of discussion and speculation about the missing Apple family members. The most common theory, and the base of emotional conflicts in many Applejack and Apple Family stories, is that Applejack's parents died in an accident while she was young. This theory is also often used to strengthen the relationship between Granny Smith and the Apple siblings. 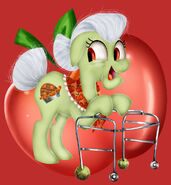 Retrieved from "https://mlpfanart.fandom.com/wiki/Granny_Smith?oldid=65223"
Community content is available under CC-BY-SA unless otherwise noted.