Fluttershy is a yellow-coated, pink-maned Pegasus pony with three pink butterflies for a cutie mark. She is one of the "mane 6" characters of the show, and represents the element of kindness.

Portrayal in the show and in fanworks

Fluttershy is usually portrayed in the show as a calm, quiet and timid pony. This is reflected in a great amount of fanfics written about her. In later episodes of the show, she has been shown to have different, more aggressive (and perhaps frightening) sides to her personality, some of which have led to nicknames/memes (see below) and have also been picked up by fan labor creators. Her main pet is often depicted as being Angel the bunny.

Some fan works take Fluttershy in a completely different direction. For example, in the abridged series "Friendship is Witchcraft" (episode one), Fluttershy is reimagined as an evil sorceress; in the fanfic Tales she turns more and more antisocial and eventually becomes a hermit, more concerned with the lives of animals than with those of her fellow ponies.

A very common theme in fan fictions featuring Fluttershy is the establishment of a relationship between her and Big Macintosh. While other pairings are obviously able to be formulated by the writer, a relationship with Big Mac is the most seen, which is very odd given the small interaction they have in the actual television series.

Also in My Little Portal, Fluttershy is seen as a Kindness Cube that acts like Fluttershy.

Fluttershy emerged as the winner of the "favorite pony" poll conducted in May 2011 on Equestria Daily, asking readers who their favorite pony was.[1] She also came in a narrow third in a similar poll about which pony wears socks best (a reference to a common image motif).[2]

As of October 26, 2011, Fluttershy leads another poll on the official My Little Pony Facebook page by a wide margin.[3]

Among target-demographic fans, the three most popular characters are Pinkie Pie, Twilight Sparkle, and Rainbow Dash, with Fluttershy, Rarity, and Applejack trailing far behind them.[citation needed]

As of September 1, 2013, Fluttershy has been voted as the Hub's favorite pony, earning her own mare-athon consisting of Dragonshy, The Stare Master, Hurricane Fluttershy, and Keep Calm and Flutter On. [4]

Flutterrage (also often "Psychoshy") is a nickname given to the more emotional and deranged side of Fluttershy's personality. While hinted at in previous episodes, it first comes to the fore in the episode The Best Night Ever, when Fluttershy cannot seem to make friends with the animals in the royal garden in Canterlot. She becomes more and more unhinged, and irritated. So much so that she begins trying to make friends with the animals by force, until she finally herds them into the palace ballroom and screams: "You're going to.... LOVE ME!" It has become a meme to fans ever since.

Flutterbitch (also known as "Flutterjerk", "Flutterwry", "Bittershy" and "Fluttercruel") is a related term, often used for Fluttershy's Discord-influenced persona that inverted her usual kindness and made her bully other ponies (see The Return of Harmony Part 1 and Part 2). It is also mentioned because of the events in Putting Your Hoof Down as a non-discorded persona.

Fluttercry refers to a common exploitable image altering a shot of a crying Fluttershy from the episode A Bird in the Hoof to have her hold something else in her hooves, often a television set; this image is then combined with a clearer shot of whatever Fluttershy is looking at. Episodes 3-9 of The Mentally Advanced Series show the first part of this image (with Fluttershy holding the severed head of Pinkie Pie) as part of the end credit sequence.

Fluttershy is a tree

Prompted by an offhand remark Fluttershy makes in the episode Over a Barrel, Fluttershy's "wish" to be a tree has jokily been taken literally by some fan art creators. In Hurricane Fluttershy, she actually does disguise herself as a tree. The portmanteau fluttertree is also common. As this picture has been drawn, this tree has pink leaves on yellow branches.

In humanized and anthropomorphized MLP fanart, Fluttershy is frequently depicted as being more curvaceous than other humanized/anthropomorphized Pegasi; who are typically depicted with slender/ectomorphic builds; as well as having the largest bust of the Mane 6.  Proponents of the Hootershy meme base their depiction on various reasons such as a reflection of Fluttershy's maternal nature or of her having closer ties to the earth than the sky.

A less common, but still notable interpretation of Fluttershy depicts her as being a fan of Heavy Metal music, often as the singer of an underground metal band. In video this is often portrayed by dubbing a death metal growl over the scene in Green Isn't Your Color where she lets out one of her squeaky screams, or giving her the singing part in PMVs for metal songs. There is also numerous fan-art and even fanfics depicting her as such. This sometimes overlaps with Flutterrage. Bronyfied, a popular Brony Metal musician, has a logo consisting of Fluttershy and an electric guitar. A canon incarnation of this meme appeared in the Equestria Girl short "The Road Less Scheduled".

This meme is directly based on Fluttershy's characterization in PONY.MOV. Specifically, it is about Fluttershy having a shy demeanor on the outside, but inside her shed, which she repeatedly warns ponies to stay out of, she kills woodland creatures and hangs their pelts and entrails from its walls a la Ed Gein.

The meme got its start solely from The PONY.MOV series, from two lines spoken by Fluttershy in DRESS.MOV, and since her episode of the series, has taken off in popularity.[citation needed]

Emoshy is an alternate personality of Fluttershy where she is depicted as "emo" with black stripes running through her pink hair. The incarnation has its roots in a picture of her on the cover of a magazine in Green Isn't Your Color. With this variant, her personality is altered so rather than just being shy she is more depressive. This interpretation frequently overlaps with Metalshy.

Whenever Fluttershy gets severely stressed or angry, as affected by gamma-radiated plant, she transforms into a giant muscular green monster. In this form, her coat turns green, her mane turns dark green (or red), her irises glow green, and her cutie mark vanishes or changes color (although it is often hard to tell, as she is seen wearing Hulk's pants). It is often used in crossovers with the Avengers. In the episode Putting Your Hoof Down, Fluttershy walks home, with piano music that sounds similar to the Lonely Man Theme from The Incredible Hulk live-action TV series.

In the episode Power Ponies, Fluttershy is sucked into a comic book, along with the rest of the mane six, and becomes Saddle Rager, who has similar powers to those of The Incredible Hulk.

In the season four episode Bats!, Fluttershy is accidentally turned into a Pegasus/vampire fruit bat hybrid through one of Twilight's spells. The term "Flutterbat" was coined by Rarity when the ponies discover Fluttershy's new appearance.

Depictions of Flutterbat in fanworks vary from the animalistic nature she displayed in the episode to her usual timid and gentle demeanor. Humanized and anthropomorphized versions of Flutterbat however tend to depict her with the traditional vampire thirst for blood along with the sexual undertones of the vampire mythos. It has also become a running gag to depict Flutterbat as mistaking Applejack's cutie mark for real apples and subsequently biting, or attempting to bite, Applejack's flank.

In the season one episode Bridle Gossip, after walking through poison joke flowers, the Mane 6 are physically altered. In Fluttershy's case, the pitch of her voice drops significantly, giving her a deep voice, reminiscent of Barry White. The term "Flutterguy" was coined by Spike when he gives the 6 ponies (sans Twilight) cursed nicknames to match their alterations.

Depictions of Flutterguy in fanworks vary from Fluttershy simply having a deep voice and nothing else to Fluttershy having other masculine features as well. Flutterguy later returns in the season four episode Filli Vanilli.

Fluttershy is usually shipped with Pinkie Pie, Big Macintosh, Rainbow Dash, or Discord (which has become increasingly popular since the premiere of Keep Calm and Flutter On). These shippings are known as "Pinkieshy" (or "Flutterpie"), "FlutterMac", "FlutterDash", and "Fluttercord" (or "Discoshy") respectively.

Fluttershy is sometimes seen as related biologically to Scootaloo as either her mom or her sister. 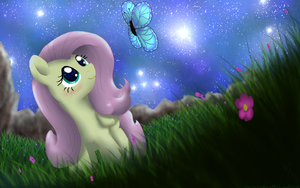