Start a Wiki
Flash Sentry is a character from My Little Pony: Equestria Girls. He is a member of the Royal Guard.

Flash is most commonly portrayed as a potential love interest for Twilight Sparkle. Before his official name was revealed, he was given the nickname "Brad". In the human world, he plays the guitar and is in a band, while in Equestria he is a royal guard.

When initially introduced, Flash was not widely accepted by the majority of the brony fanbase who viewed him as a generic love interest character without any remarkable personality traits of his own. This led to the creation of a meme labeling Flash as a "Waifu Stealer" in several humor oriented fan works suggesting that the dislike for Flash was based more on jealousy than impartial criticism. Flash Sentry's reappearance in Three's A Crowd provoked a somewhat significant outburst of negativity.

Shipping-wise, Flash is most commonly shipped with Twilight due to the fact the she has a crush on his human counterpart. This shipping is called Flashlight. He is also sometimes shipped with Sunset Shimmer, his ex-girlfriend. In terms of homosexual shipping, he has also been shipped with Shining Armor in a few instances.

A handful of stories have portrayed Flash as Scootaloo's older brother. [1][2][3] 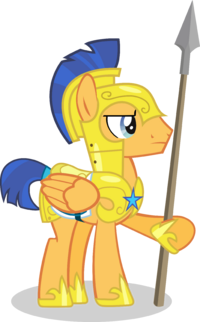 Flash Sentry on the FiM Wiki

Retrieved from "https://mlpfanart.fandom.com/wiki/Flash_Sentry?oldid=84310"
Community content is available under CC-BY-SA unless otherwise noted.