My Little Pony: Fighting is Magic was an upcoming fan-made fighting game inspired by the animated television series My Little Pony Friendship is Magic.[1][2] It was under development by a team of nine volunteers who call themselves Mane6.[3][4] Being of a fan-made nature, this game was neither licensed nor endorsed by Hasbro.

Though the game will no longer be developed based on the My Little Pony characters, the Mane6 team (with some membership changes) has reused the core gameplay elements they devised, with new non-copyrighted characters provided by artist Lauren Faust, the original creative lead on the Friendship is Magic series.[5] In August 2015, the game was relaunched under the title Them's Fightin' Herds.[6] Them's Fightin' Herds was submitted for crowdfunding through Indiegogo and surpassed its funding goal before the set deadline of October 22, 2015.

The final version of the game was to feature seventeen playable characters in all with the six main characters from the show playable from launch.[3] Eleven more characters were to follow in semi-regular updates.[7] The game was to be downloadable and free to play. Both local and online multiplayer modes were to be included as well as a story mode.[7][8] Character-specific moves were also to be present in-game.[8] My Little Pony: Fighting is Magic was to feature various stages that represented places from Equestria. The Everfree Forest and Canterlot were mentioned.[9]

Players were to be allowed to select a color scheme for their character from fixed palettes.[10] However, one of the animators stated that the team would not provide a custom pony creator and/or alternate costumes; they are practically impossible to make due to engine limitations and technical difficulties.[11]

The game originally began when a Mane6 team member, Anukan made mock-up screens under the title of "Marevel vs Clopcom" and posted them to a Ponychan board discussing fighting ponies. When another, Nappy, saw those images, he became determined to make them a reality, and in summer of 2011, the team, which at the time, consisted not only of Nappy and Anukan, but also of Jay Wright, Lucas Ellinghaus, James Workman, and Prominence, met on Skype for the first time.[12]

Though an unlicensed work from Hasbro, the holders of the My Little Pony franchise intellectual property, the Mane 6 team had not received any cease and desist notices from the company as of October 12, 2011.[15] Like much of the rest of the Internet phenomenon surrounding Friendship is Magic, Hasbro has sometimes allowed episodes of the show along with parodies and mash-ups of the works to be redistributed freely across the Internet, helping to create a participator culture that has drawn a broader audience to the show.[16][17][18][19]

On January 30, 2012, Prominence left the development team for personal reasons.[20]

A test build was leaked by a member of the Quality Assurance team on August 2, 2012. As a result, Mane6 announced it was cancelling all plans of external testing and suspending video updates about the game's features for the foreseeable future.[21] However, they released a clarification and FAQ the next day, saying that they overreacted some, and that while they were still replacing their entire QA team (to ensure no further leaks), they don't hate the fans for downloading and playing the leak. Also, they stated that the Canterlot Gardens con "is still go".[22]

Maxwell McGee, of GameSpot, featured this game as "The Most Unlikely Fighter You've Never Heard Of", covering the game's information and revealing a picture of Pinkie Pie fighting Rainbow Dash, along with some other non in-game pictures. He also included an in-depth look at the designing of the game, and working with the 2D Fighter Maker 2002 engine.[12]

On February 8, 2013, the team announced that they had received a cease-and-desist order from Hasbro, and while they were trying to contact Hasbro to negotiate, they would follow the directives of the C&D letter, and suspend production indefinitely. They also announced the resignation of James Workman (aka Elosande) from the development team as of February 6, 2013.[23] There was a petition to convince Hasbro to let Mane6 continue development on Fighting is Magic.[24]

Mane6 were unable to come to agreements with Hasbro and began to redo the game using new artwork assets.[5] Lauren Faust offered to provide original character designs for Mane6 for any future endeavors,[25] and her official involvement with the project was announced at the end of February.[5] The cease and desist is believed, by those in the fandom, to be a result of the visibility of the project through the EVO 2013 tournament.[25]

After Mane6 was forced to abandon the original project, another group of fans decided to take the leaked build and quietly continue work on it. This version, called Fighting is Magic - Tribute Edition, was released in February 2014.[26]

Fighting is Magic was a traditional one-on-one fighter that took place in a two-dimensional plane. The gameplay borrowed the dial-a-combo system made popular by renowned fighters such as Capcom's Versus crossover series. Standard fighting game fare was incorporated in the game, from character lifebars to a 'super' gauge to a round timer to special and super attacks. Characters engaged in a 'best-of' battle, where one must fully deplete the other's lifebar or have more health remaining once the timer reaches zero for a set number of rounds. The character who won the most number of rounds was declared the winner of the match.

Fighting is Magic had a four-button layout sceme: light, medium, heavy, and magic. The latter button was an original mechanic that differed with each character, and originally began as a work-around for difficulties with inputting two different attack types at the same time.[12] The system was like the Drive system from BlazBlue.

Fighting is Magic was slated to have a roster of 17 playable characters. Since game development started prior to the second season of Friendship is Magic, there were to be no characters introduced in season two on the roster.[27] The roster included Twilight Sparkle, Applejack, Rarity, Pinkie Pie, Rainbow Dash, and Fluttershy.

The music of Fighting is Magic was composed by RainbowCrash88 and WhitetailMusic. The themes for all of the mane six were released on Mane6's website. In SaberSpark's video, Rainbow Dash's theme won 23rd place during the community voted brony songs of 2012 with 52 votes. 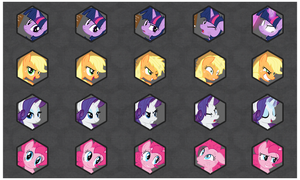 Retrieved from "https://mlpfanart.fandom.com/wiki/Fighting_is_Magic?oldid=95577"
Community content is available under CC-BY-SA unless otherwise noted.