Doctor Whooves is a commonly appearing background pony in My Little Pony Friendship is Magic, having gained popularity due to his resemblance to his namesake Doctor Who.

His spiky brown mane and his hourglass cutie mark lend him the appearance of the Tenth Doctor from the popular British television series Doctor Who, hence the moniker, which originated on the /co/ board on 4chan.[citation needed] The name was eventually (unofficially) adopted by the show's crew.[N 1]

The pony has officially obtained the name "Time Turner" in the Enterplay trading card set that debuted at the 2012 Summer BronyCon. Said name was given to the pony by Wendy/midori-no-ink, a consultant for the first batch of trading cards.[N 2][N 3] BaldDumboRat also came up with the same name, shortly before the release of the card.[citation needed] However, Guy Brand, owner of Mighty Fine, the company that runs the website WeLoveFine.com, claimed that, upon consultation with Hasbro, the pony's official name is "Dr. Hooves".[N 4] The guidebook released in June 2013 lists the pony's name as "Dr. Hooves".

He is often imagined to have an English accent, despite pieces of dialogue in the actual show (Call of the Cutie and Sonic Rainboom) showing no traces of this.

In fan labor, Doctor Whooves is often accompanied by a companion, just like in the TV show. Examples include Apple Bloom (likely due to their previous interaction in Call of the Cutie, or possibly because she could play the role of young Amy Pond), Roseluck (because of her resemblance to Doctor Who character Rose Tyler), Twilight Sparkle (likely due to her cutie mark involving a starburst, leading to the thought combination of TIME and SPACE, both part of the acronym TARDIS and TARDIE. It is also because some see her as Rose Tyler as well), and Derpy Hooves. Beyond fan art, there are also two notable series of audioplays (link to episode 1 by PierceSmoulder and episode 1 by Squeak Anon) and some pieces of fan animation (e.g. these two by enquaynay).

In some fan labor, such as BaldDumboRat's tumblr Lovestruck Derpy, Derpy is depicted as being in love with him. Although it is less common, Whooves has also been shipped with Twilight,[DT 1][DT 2] Pinkie Pie,[DP 1] and Roseluck.[citation needed]

Dr. Whooves can also be portrayed as the only stallion in a group of mares, usually these being "background ponies," but that would be merely a reference to the fact that real life horses lives in bands, with these bands being harems, usually consisting of a single stallion and several mares.

Variations on the character

This is the most common version of Doctor Whooves, especially in works where he is the primary protagonist. Whooves is the Doctor from another, humanoid dominated universe; aka, the universe depicted in Doctor Who. The most common version of the Doctor which arrives in Equestria is the Tenth Doctor though he is sometimes depicted as a later regeneration. Due to a dimensional mishap with the TARDIS, the Doctor is transported from his home universe to the My Little Pony universe and turns into a pony by either undergoing regeneration or simply being transformed by the universe's equine-centric laws. In either case, he then goes on to have a typically Doctor Who adventure with whatever companion(s) he picks up and has all his usual equipment and off-beat... Doctor-ness. Who-verse aliens and monsters typically show up either as they normally are or altered to fit the equine/four-legged model. In most fanfics, if the Doctor were to return to his dimension, he would return to looking like a human. If a pony from Equestria were to travel to the Doctor's dimension, they would then turn into a human (form and species will change depending on what universe they travel to).[citation needed]

A Discorded version of Doctor Whooves, which has an ask blog, http://askdiscordwhooves.tumblr.com

Sometimes Whooves isn't from another dimension, simply a pony-verse's version of the Doctor (i.e., Whooves has always been a pony). He is usually stated as hailing from the planet Gallopfrey (a "ponified" version of the Doctor Who planet Gallifrey), making him the ponified version native to the Equestrian universe. He is part of a species known as the Time Ponies (ponified version of the Time Lords). This version can even have other things ponified such as the words read across the top of the TARDIS changed to ‘PONY PUBLIC CALL BOX’ and the TARDIS renamed TARDIE (Time and Relative Dimension in Equestria). This version of the character also allows for multiple Doctors to exist without causing a paradox (i.e., the "humanoid" one warps into Equestria and works alongside the equine one).[citation needed]

Alternatively, he's not technically an alien pony, just a strange one who may or may not have a time machine or power over time. This version could be based on the Peter Cushing version of the Doctor. He's usually an incidental or side character in this model.

Occasionally he is seen as a semi-background character where his involvement is merely hinted at. In these cases the residents of Ponyville usually know him under an alter-ego, much like the actual Doctor often used the name "John Smith" to blend in. There are also times when he is portrayed as a pony who actually believes this alter-ego, due to his Time Lord/Pony/Colt self having been stored in a fob watch using a chameleon arch, which, in the Doctor Who universe, is a special device used to store the essence of a Time Lord, allowing them to become a different person in their mind and change their physiology to that of a different species.

He is not Doctor Whooves, just a pony that happens to look like him. In this portrayal, he's just another Ponyville citizen who happens to have an hourglass for a cutie mark. Usually, he is depicted as a clockmaker or something of the sort. An example of this portrayal is Sepia Tock.

There are other ponies in the show with the same hourglass cutie mark. Due to this repeated use of the cutie mark, some fans believe these ponies are regenerated versions of him, his companions, or family.[citation needed] One attempt to match ponies and Doctor Who characters can be found below. 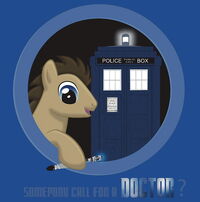