Discord is a former antagonist and now a recurring character in My Little Pony: Friendship is Magic. He is a draconequus and the spirit of chaos and disharmony that once tried to plunge Equestria into eternal chaos and was later reformed at the hooves of Fluttershy. He is known for his notorious pranking and nonchalant attitude, and is therefore often likened to an internet troll.

Discord is most commonly portrayed as a trickster and prankster that uses his godly powers to cause misery and chaos for his own personal amusement. His personality is often portrayed as very similar to the Star Trek character Q, due to Q being Lauren Faust's inspiration for the character. This is further reinforced by the fact that John de Lancie, the actor of Q, also voices Discord in the series.

In fan works, Discord personality can vary between a slightly misunderstood trickster with a nevertheless good heart and a sadistic and manipulative oppressor. The first form of characterization is more common in fanfics featuring him after his reformation in Keep Calm and Flutter On, while the latter is more used in fanfics where he is the main antagonist.

Use in fan fiction

Discord is occasionally used as a recurring antagonist in some fan works. In some, he once again tries to plunge Equestria into chaos, while others show him with a tragic past which drove him to his current state. In some fan fics, he is portrayed as a hero or an anti-hero in which he redeems himself by assisting the Mane 6 in stopping a powerful threat from taking over/destroying Equestria. In one fan fic, he enters a relationship with Princess Celestia, while in another he helps the Mane 6 defeat his brother Order.[citation needed]

In The Human Elements of Harmony, half of Discord's soul made its way to Earth, where he takes the form of Christopher Drocsid and becomes mayor of Wilmont, New York. There, with an army of Pegasi and unicorns, he feeds off the chaos of Earth and plans to take control of both the human world and Equestria.

Use in fan videos

Discord has been used in a fair amount of videos. Some depict his work rather than himself, while others try to go into his family life. Still others are out there where Discord is shown as a brutal beast bent on devouring the world of Equestria and its citizens. An example of this portrayal is PONY.MOV.

Some videos include The way through the World of Discord, which is based off of the original video, The way Through Mishicbatllaban, Daddy Discord, a slideshow based off a song created with the same title, and Discord vs Fry Dance Off, which is just a looped clip of Phillip J. Fry (from Futurama) and Discord dancing in their respective scenes to the music known as "The Hustle".

One common fan voice for Discord is Rev897, usually credited as simply "Rev". He is known for his ability to accurately impersonate John de Lancie and add his own unique twists to the voice. He is the voice for Project Saturation, Epic Pony Rap Battles of Equestria, Princess Molestia, and several other well-known projects. He also voices Discord in "Snowdrop Trailer Review", as well as Journey of the Spark.

Discord is voiced by NDLMongoose in smaller fan projects, comic dubs, and fandubs. His best known performance came when he voiced Discord in Tats TopVideo's "Top 22 Non Gaming Creepypastas". He is also the voice of Discord in the comic dub "An Almost Pleasant Surprise". His voice is an imitation of Rev's perfomance.

He is voiced by Max Gilardi in the PONY.MOV series, and by Lanovran in the video Daddy Discord.

Discord is commonly shipped with Princess Celestia, with many works of fan fiction portraying them as exes that broke up when Princess Celestia and Princess Luna used the Elements of Harmony on him the first time. In such stories where Discord x Celestia shipping is a focus, Discord escapes from his prison, and somehow the two get into a relationship once again. Other times it is simply referred to. This shipping is commonly referred to as Celesticord or Dislestia.[1][2][3][4][5]

Discord is also commonly shipped with Pinkie Pie, albeit much less in fan fiction. This is probably due to how much Pinkie Pie enjoyed the benefits of Discord's chaos in the episode The Return of Harmony Part 1 where she specifically asked her friends if they were sure they wanted to stop eternal chaos from consuming Equestria when it came with chocolate rain. Also her in show character is quite random and chaotic as it is, something fanfic writers pounce upon when they need an excuse to have Discord fall in love with Pinkie. The romantic version of this shipping is commonly referred to as Pinkiecord or Dispie.[6][7][8][9][10][11]

Fluttershy, for unknown reasons, has quite a bit of shipping with Discord as well. This ship is commonly referred to as Discordshy, Disshy, or Fluttercord. Discordshy is also one of the nicknames for Fluttershy when she was corrupted by Discord’s chaos.[12][13][14][15][16][17]

Also, though not a romantic shipping, Screwball, the pony seen in the episode The Return of Harmony Part 2, has at least two depictions of her as Discord's daughter, thanks to the PMV Daddy Discord.[18][19]

There are several fanfics in where Discord and Twilight are the main characters. Although there are quite a few shipping stories between them, there are other stories which do not feature this. Some examples are stories wherein she finds that she is related to Discord. There are also several adventure stories set before Season 3 where Discord breaks out of his stone prison and Twilight is a key to stopping him.

Sometimes, Discord is shipped with Princess Luna. While they hardly interacted in the series, some fans still ship the two and there have been many fanart and fanfics of the shipping between the two. They are somewhat similar as well as both of them were imprisoned thousands of years ago and were former antagonists who learned the value of friendship. This shipping is often called Discuna or Lunacord.

A common portrayal in fan labor has Discord share a connection of some sort to Star Swirl the Bearded. In some stories, Discord is explained to be a transmogrification of Star Swirl, though this is debunked in Shadow Play. In others, Star Swirl is Discord's creator[20] or teacher[specify]. 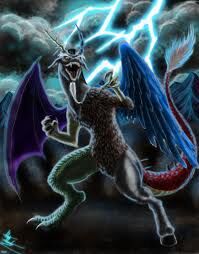