Daring Do is a Pegasus pony and supporting character in My Little Pony Friendship is Magic who appears as a fictional character in Read It and Weep and a real-life character in Daring Don't. She shares Rainbow Dash's character model and eye color, but with a grayscale mane and a different coat color and cutie mark.

Depicted as a treasure hunter in her debut episode and described by Twilight Sparkle as "adventurous, fierce, and undeniably, unquestionably, unstoppable", Daring Do is typically shown to be something of a daredevil: courageous and at times cocky, not unlike Rainbow Dash herself. After the premiere of Daring Don't, Daring Do has also been depicted as something of a loner, one who either begrudgingly accepts or outright refuses the help of others.

In the show, Daring Do is the main character of a series of adventure books. Numerous fan works attempt to adapt these books into fully fleshed out stories.[FF 1][FF 2] Other authors' stories will attempt to fill in the gaps left by the show and adapt their take on the book series' later installments, usually including the words "Daring Do and the..." in the title.[FF 3] In such stories, Daring Do would seek out ancient Equestrian artifacts or priceless treasures and face life-threatening dangers and/or rivaling treasure hunters in order to claim them.

Some works focus not on Daring Do but on the identity of the author of her books.[FF 4][FA 1][FF 5]

Even before the premiere of Daring Don't, Daring Do's identity as a living, breathing pony in Equestria was a common plot element used in fan labor.[FF 6][FF 7]

Because of Daring Do's similarities to the film character Indiana Jones, some fan labor sees her going on adventures identical to his or teaming up with him.[FF 8][FF 9]

In a series of fan stories set in an alternate universe -- the "Manehattanverse" by author Little Jackie Papercut -- Daring Do is one of the Elements of Harmony.[FF 10] Here, she is the element of honesty and her real name is Honey Do.

A "Just For Fun" page on TV Tropes is dedicated to a fan-made Daring Do mythos. 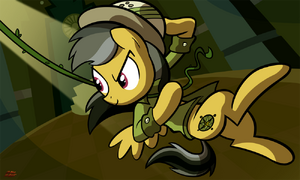 Retrieved from "https://mlpfanart.fandom.com/wiki/Daring_Do?oldid=73559"
Community content is available under CC-BY-SA unless otherwise noted.