Fan works involving the Cutie Mark Crusaders typically focus on the messes and adventures they get into, the moment(s) of truth when they discover their talents, or what happens to them when they've grown up.

Apple Bloom is the original Crusader, having an entire episode devoted to her efforts to find her special talent before she officially met Sweetie Belle and Scootaloo. She's the most impatient and focused member of the group; whereas Sweetie Belle and Scootaloo can look back at their shenanigans as simply a fun time, Apple Bloom tends to focus more on the failure to get the coveted mark.

Her talent is considered to be related to woodwork or repairs. When she has the mark, she usually keeps the farm equipment in repair or runs a carpentry shop in town.

Being the younger sister of Rarity has given Sweetie some measure of propriety when compared to her friends, but she's still a rambunctious filly. She's arguably the smartest Crusader, despite taking longer to catch on to things, and certainly the most cautious, always being the one to question the safety of certain tasks like zip-lining.

Her talent is in music, especially singing. After getting her mark, she usually goes on to be a popular singer touring Equestria.

Rainbow Dash in miniature, which makes sense because she idolizes the older pegasus. She's usually the one to suggest more extreme ideas for cutie mark acquisition and tends to act before thinking. Scootaloo is the transportation for the Crusaders, often hauling the other two around in a wagon hitched to her trademark scooter. In fanon, her being called a chicken and dodo as well as her fan-filly devotion to Rainbow Dash, are commonly used tropes.

Her family situation is currently unknown beyond the fact that she is NOT Rainbow Dash's sister. Fans have no problems portraying her as an orphan (and occasionally adopted by Dash), as doing so is easier than picking out or creating parents for her (although a few fanarts and fanfics have indeed done just that).

Her talent is either dancing, extreme sports, or her scooter. Her future typically lands her on the Wonderbolts alongside Rainbow Dash, but she's also been seen as a famous dancer.

While the CMC usually consists only of its three principal in-show members, fan fictions occasionally have the fillies bring in other blank-flanks such as Dinky and Pipsqueak. Sometimes Twist is also made an honorary Crusader despite already having her mark. Fan characters, like Nyx, are also found in the group throughout fan fictions. In the show, Apple Bloom's cousin, Babs Seed, becomes the fourth member, and starts the Manehatten branch of the Cutie Mark Crusaders.

Fics and comics set in the future, after the CMC have all earned their cutie marks, have had the older and wiser ponies take the idea behind Cutie Mark Crusading and turning it into a more organized club or mentorship program, serving the double purpose of helping younger ponies discover their talents in a friendly environment and giving the original members a way to keep in touch as their lives take different paths. 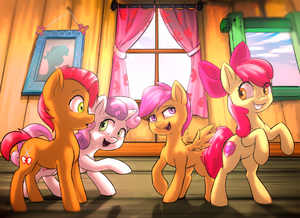