Start a Wiki
CRISIS: Equestria is a fanfiction written by GanonFLCL and published on Equestria Daily. As of December 15, 2012 it's thirty-two chapters in length and growing.

Princess Celestia discovers the presence of a magical rift in the Everfree Forest, and fearing that it may be harmful to Equestria she sends the Mane Six to investigate. When they arrive Twilight Sparkle attempts to seal the portal but only causes it to expand and suck herself and her friends inside, sending them hurtling through a strange in-between world of magic like they've never seen. They manage to catch another portal, but do not know where it leads. Meanwhile, Doctor Whooves discovers the rift and properly seals it himself, but discovers that six ponies - he does not know who yet - were sucked in. He decides to contact somepony on the other side for help.

The Mane Six find themselves in a deserted alleyway in a strange new world that is not at all like their own Equestria. The sun has been blocked out by pollution and instead of small cottages there are large buildings and neon signs and there are more ponies than they can count all around them. They decide to try and learn more about this new world and how they can find their way back home. To their confusion, everypony they speak to either runs away in fear or surprise or are disgusted with them. Eventually they discover the problem - everyone in this world wears clothes, and they're not wearing any at all. Before they can correct this problem the police arrive and arrest them for indecent exposure and walking around without identification.

They meet a police captain named Flathoof who is kind enough to help get them off with minor charges and get them IDs, convincing his boss, Chief Smokestack, that they're from a place called "Utopia". They get their photos from a disgruntled photographer who is apparently friends with Flathoof; she doesn't much like Twilight or Applejack it seems, and botches their photographs. The Mane Six discover that in this world Ponyville is non-existent, so when asked if Ponyville is a district of this "Utopia" they play along with Flathoof and say it is. Meanwhile, Doctor Whooves makes contact with his counterpart in this world, a unicorn named Tick Tock. He asks her to find out who the ponies are that were sent to her world so they can try and get them home.

As all of this is happening, a silver unicorn - Lord Silvertongue - who apparently rules over the city of Pandemonium that the Mane Six have found themselves in, discovers their existence while investigating a strange imbalance in the forces of light and darkness as ordered by the Goddess of Disparity, Nihila. He summons his personal assassin, Shadowstep, to seek out the Mane Six and learn more. During his investigation, he murders Snapshot after milking her for information.

Flathoof, who has been forced to serve as the Mane Six's parole officer, introduces them to an old friend of his, a pegasus named Lockwood who is the landlord of a local apartment complex. Lockwood gets them a room and even waives their first month of rent. Twilight, intent on going home, goes to the local database to find a way back to their Equestria under the guise of seeking out a new job. In the meantime, Flathoof and Applejack begin to form a friendly bond with one another, due to very similar upbringings.

Tick Tock returns home after having found out who the Mane Six are, and she and Doctor Whooves begin to panic, as the Mane Six being transported between worlds is causing Discord's seal to weaken. They are given an ultimatum - get home in four weeks, possibly in three, or their own Equestria will be thrown into Chaos. Tick Tock makes to leave, but is ambushed by Shadowstep. She barely escapes with her life.

The following day, the Mane Six and Flathoof learn that everypony must go to a nearby hospital to receive a mandatory inoculation for a disease called "Hoof Rot". When they arrive they find that the health care in this world is so inefficient that it would take fifteen hours to recieve their shots. By chance, they manage to luck out and are given the shots by the Chief of Medicine, Doctor Blutsauger, under the notion that they are new patients who will bring in more money to the hospital. When they return home, they meet Tick Tock and are told of their world's plight. They need to leave the city quickly. Lockwood helps them get some fake passes out of the city from a friend of his Keeneye, but when they return home to prepare to leave, an explosion destroys their apartment and nearly kills them. Flathoof becomes worried about Snapshot and heads to her apartment with Tick Tock, where they are ambushed by Shadowstep again. They manage to fight him off and leave him for dead.

Silvertongue manages to recover him though, and gives him magical new metal wings, but then immediately after sends him to die in a terrible place called the Blood Mire. In the meantime, he and his accomplice, Doctor Blutsauger, reveal their plan at last: Cloning the Mane Six and infusing the with Nihila's magic to create wielders of the Elements of Discord. Twilight Sparkle's dark clone is so powerful that even while being created, her magic severely injures Silvertongue.

The Mane Six make it to the Gate after bidding their farewells to Flathoof's family. They are stopped by a soldier named Jetstream and his robotic Troopers, but the Mane Six manage to escape. Jetstream reports his failure to Silvertongue, who decides to punish him by setting him against the clones of the Mane Six, who are now their own ponies and are filled with powerful magic. Starlight Shadow, the clone of Twilight Sparkle. Curacao, for Applejack. Havocwing, for Fluttershy. Grayscale Force, for Rainbow Dash. Insipid, for Rarity. And Red Velvet, for Pinkie Pie. Jetstream is killed in this "testing" process.

The Mane Six meanwhile try to cross the Redblade Mountains, unsuccessfully, and end up getting blown into the hunting grounds of terrible mutant bug creatures called Gargantuans. One of these creatures stings Fluttershy, sending her into shock and later a coma. The Mane Six flee the area, but become overwhelmed. They are saved by the timely arrival of their evil counterparts, who play nice in order to get closer to them; Silvertongue apparently is trying to corrupt the Mane Six so they can destroy Harmonia, the Goddess of Balance. 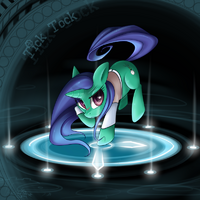 Retrieved from "https://mlpfanart.fandom.com/wiki/CRISIS:_Equestria?oldid=54708"
Community content is available under CC-BY-SA unless otherwise noted.