Button Mash is a fan name given to a young brown-haired Earth pony colt who appears during The Perfect Stallion in Hearts and Hooves Day, in which he is seen playing an arcade game. He wears a red and white beanie with a green propeller that never stops spinning. The character became popular as the titular character of JanAnimations' Button's Adventures.

Button Mash is commonly portrayed as a video game fanatic based on his appearance in the show. He is also usually portrayed as curious and hyper.[1][2] Button appears to have a short attention span,[1][3] and appears to occasionally have trouble separating the fantasy world of video games from real life. Button is also shown to be something of a crybaby in JanAnimations' works; he cries for his mother in the Button's Adventures pilot and Bar Buddies short, and he laments wasting six hours on a video game in the Perfect Stallion "deleted scene."

Button's appearance was created by DHX under contract by Hasbro. Everything else popular about Button Mash, including his name, personality, and relation with other characters, was created by JanAnimations and ShadyVox.

Because he doesn't have a cutie mark, Button is often friends with the Cutie Mark Crusaders[2][3][4] As a result of JanAnimations' Ask-TheCrusaders tumblr, he is often shipped with Sweetie Belle.[2][4]. In clopfiction, Button Mash is occasionally paired with his mother, an original character created by Jan's friend Berry Sweet. He is also sometimes paired with Babs Seed.[specify]

Button is commonly drawn with his father's fake mustache or drinking from a juice box, reminiscent of scenes from Button's Adventures. He also has memes centered around peeling back a "Are you a winner?" label on a juice box. He's also spawned a meme around an old game box he plays, titled "Button's odd game".

Button Mash as he appears in the Minecraft world. Appearance in "Don't Mine at Night"

Button Mash playing with Sweetie Belle in the snow 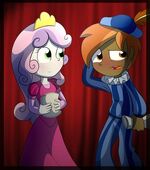 In EQG form with Sweetie Belle 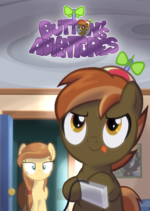 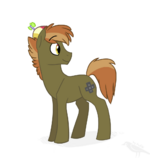 Retrieved from "https://mlpfanart.fandom.com/wiki/Button_Mash?oldid=94680"
Community content is available under CC-BY-SA unless otherwise noted.