Braeburn is a cousin of Applejack and Apple Bloom. He first appears as one of the Appleloosan settlers in Over a Barrel who assists in making peace between the ponies and buffalo.

Braeburn is very similar to Pinkie Pie. He is generally portrayed as very energetic and enthusiastic, seeming very friendly. However, he can be very clueless about what is going on around him.

Being one of the first stallions to have a major role in an episode, Braeburn is commonly used in clopfiction. He also often serves as comic relief because of his upbeat nature and occasional cluelessness.[1] Numerous works portray him being into stallions and dealing with an unreceptive society.[2]

Braeburn is commonly paired with other stallions including Soarin.[3] He is also commonly shipped with members of the Mane Six particularly Pinkie Pie. Some people also ship him with Little Strongheart, a female buffalo. [4] 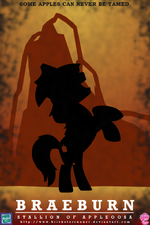 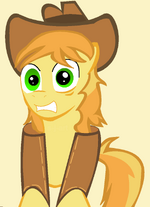 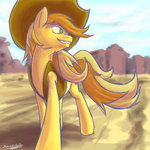 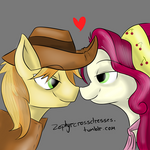 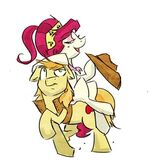 Retrieved from "https://mlpfanart.fandom.com/wiki/Braeburn?oldid=86748"
Community content is available under CC-BY-SA unless otherwise noted.