Bon Bon is the fan name for a background pony from My Little Pony Friendship is Magic. As of the episode Putting Your Hoof Down, she has had five brief speaking roles, each time with a different-sounding voice.

In the episode Slice of Life, she is revealed to be Sweetie Drops, a former monster-hunting agent of Princess Celestia's, living in Ponyville under the alias "Bon Bon" after the agency was dissolved.

In fan labor, she is strongly tied to Lyra; artwork and fiction showing the two together far outnumber depictions of Bon Bon on her own. The two are often portrayed as being in a romantic relationship, but there are many depictions of them as friends as well. For instance, short stories by Paxtofettel describe the two as "merely" friends, and Bon Bon in a committed relationship with Caramel. According to her Series 2 trading card the two of them are roommates. She also is shown in fan fiction to go on double dates with her boyfriend, Boy Boy, and Lyra and Guyra.[citation needed]

Unlike Lyra, who has several memes and—sometimes mutually contradictory—personality quirks associated with her, Bon Bon's personality in "fanon" is less clearly defined. She mostly plays the foil and "straight pony" to whatever antics authors and artists think up for Lyra. Bon Bon's various lines do not seem to greatly have influenced the majority of fan labor about her much.

Following the airing of A Canterlot Wedding, a growing fan theory is Bon Bon being a changeling, considering her constantly changing voice and tendency to be "cloned" in large crowds.[FF 1][FF 2]

For a non-romantic relationship, she is sometimes identified as the aunt of Twist, due to their similar backgrounds in candy, as in RealityCheck's Nyxverse. [FF 3][FF 4] 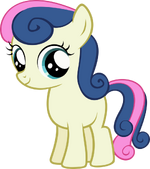