Berry Punch is the fan name for a background pony often seen in Ponyville.

In Call of the Cutie, Berry Punch furtively sips from a punch bowl after making sure no one is watching her. This scene gave her a "fanon" reputation as Ponyville's town drunk. This interpretation is featured in a decent amount of the fan art that depicts her, and has been approvingly acknowledged by the storyboard artist who boarded the scene.[1]

Because of her association with alcoholism, she has inspired the MLP Synchtube-style drinking game site, Berrytube.

Regarding family, Berry Punch is commonly depicted as the mother of Berry Pinch.[2] This concept sprouts from a scene in Bridle Gossip when Berry Punch pulls Berry Pinch into a house to hide her from Zecora. This also garnered her the descriptive moniker, "Overly Protective Parent Pony.

Berry Punch is occasionally paired up with Colgate, either romantically or as friends.[2][3] Like many such fanon pairings, this stems from a shot in the show which briefly shows them standing close together; in this case the shot is from the episode Winter Wrap Up.

She is part of an ask tumblr that features her as the younger sister of Cheerilee, and being married to Colgate. 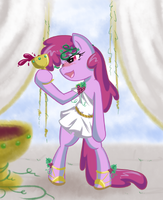 Retrieved from "https://mlpfanart.fandom.com/wiki/Berry_Punch?oldid=91684"
Community content is available under CC-BY-SA unless otherwise noted.