Babs Seed is a filly from Manehattan who visits Ponyville in One Bad Apple. She is one of Apple Bloom's cousins. Initially a bully towards the Crusaders, she is eventually inducted into the group before returning home. In Bloom & Gloom, it is revealed through letter that Babs has gotten a pair of scissors as a cutie mark.

Numerous fan works depict Babs Seed returning to Manehattan following the events of One Bad Apple. Most examples see her confronting bullies from before she visited Ponyville and founding a new branch of the Cutie Mark Crusaders in Manehattan as she said she would do at the end of the episode.[1][2][3][4]

A few fan works see Babs actually moving to Ponyville.[5] Such works often have her confront Diamond Tiara and Silver Spoon as she gets used to the more rural way of life in Ponyville.[6]

Babs is generally depicted with insecurities hidden behind a tough attitude, a trait developed from being subjected to bullying and living in an urban environment. Much like her cousins, she is generally portrayed as tomboyish in nature and stubborn.

Babs' family has not yet appeared in the show. However, because she lives in Manehattan and is a cousin of Applejack and Apple Bloom, Babs is often thought to be the daughter of Aunt and Uncle Orange. As mentioned in One Bad Apple, she also has a sister. This sister usually appears in fan works.[1][6][4]

Babs Seed is generally paired with Apple Bloom in both clopfics and non-clopfics.[1][6] This pairing is known as AppleSeed.[7] Occasionally, she is also shipped with one of the other two crusaders. In clopfics, Babs Seed is sometimes paired with Spike. More recently, she has been paired with Button Mash.[specify]

Babs' cutie mark is commonly interpreted in fan labor as relating to flowers and seeds. As of the episode Bloom & Gloom, her cutie mark is a pair of scissors with apple-shaped handles. 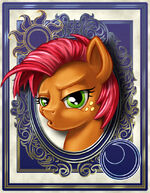