Applejack is one of the main characters of Friendship is Magic. In fan fiction, she is commonly a supporting character or one half of a couple, but rarely the only central character.

In the show, Applejack is shown to be loyal to her friends, friendly, brave and strong. She represents the element of honesty. Fan labor depictions tend largely to stick to that characterization. Her country accent and mannerisms are targets for memes and fan fictions.[FA 1] One of the running gags on the video series Friendship is Witchcraft is Applejack's Southern jargon, and the creators usually introduce several new "catchphrases" for Applejack in every episode. In My Little Pony: Guardian Mares, she is the Guardian Mare form of Emma Sue Luna

Applejack is most commonly shipped with Rainbow Dash[FM-A 1][FF-A 1][FF-A 2] and Rarity[FF-B 1][FF-B 2], ships typically referred to as "AppleDash" and "RariJack", respectively. These ideas originate in the show, where both an athletic rivalry between Applejack and Rainbow Dash has been demonstrated, as well as a clear difference in personality in the way Applejack and Rarity approach physical exertion and getting dirty. The latter may also represent a variation on the common theme of a country "boy" and the city girl getting together despite their differences. Another, somewhat less common, ship involving Applejack is Applejack and Caramel, or CaramelJack.[FF-C 1][FF-C 2][FF-C 3]

Applejack is also occasionally shipped with Twilight Sparkle, Pinkie Pie or Fluttershy. The names of these shippings are "AppleSpark", "Apple Pie" and "AppleShy", respectively. These seem to be the less popular of Applejack shippings.

Beyond that, Applejack is sometimes written as being incestuous in explicit fiction, usually with Big Macintosh, being seen as a "Southerner hick" by some.[FF-D 1]

Applejack's parents have never been shown in the show. This has led some fans to speculate that they have passed on.[FA 2] Two shooting stars seen flying over her house in the episode Apple Family Reunion are, according to Sibsy, supposed to symbolize her parents.[R 1]

Like Rarity, Applejack in humanized and anthropomorphized fanart is usually depicted as being taller than the other mane 6 although her build varies from slim and lank to athletic and toned.

A fan term for humanized/anthropomorphized Applejack fan works that depict her as exceptionally voluptuous or have an otherwise sexual theme to them.

A fan-given term for art that depicts Applejack as having a pronounced pear body type with wide and very muscular hips and thighs as a result of her "applebucking" harvesting method. Although primarily found in humanized/anthropomorphized works, several pieces of pony fan art have depicted her this way as well.

Due to Applejack having fewer episodes than other members of the mane six during season two, some fans started a running gag to label her as a background pony. For example, the season two episode The Last Roundup is better known as the first episode in which Derpy Hooves officially spoke and the subsequent controversy her depiction generated.

The popularity of the meme has begun to diminish as of seasons three, in which Applejack received more starring (as well as co-starring) roles than the majority of the cast. Season four has continued this trend, with episodes such as Bats!, Simple Ways and Somepony to Watch Over Me giving Applejack prominent screen time.

Who's a silly pony?

A phrase associated with Applejack due to the G1 My Little Pony song "Applejack's Song" about the original, clumsier version of the character. It often refers to an image of Applejack looking or doing "silly" things. The phrase is sometimes followed by "You're a silly pony", as heard in the song. 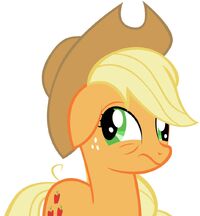 Retrieved from "https://mlpfanart.fandom.com/wiki/Applejack?oldid=95540"
Community content is available under CC-BY-SA unless otherwise noted.