Apple Bloom is a member of the Cutie Mark Crusaders. She is considered to be its founder due to her being the first of the three in the episode Call of the Cutie to try to search for her cutie mark before meeting Scootaloo and Sweetie Belle. She is the little sister of both Applejack and Big Macintosh, the grand-daughter of Granny Smith and the cousin of Babs Seed.

Apple Bloom's personality is often defined, but not limited to, her desire to earn her cutie mark. She is generally portrayed as both impatient and devoted to get her own mark. Aside from her crusade, she is shown to be brave, good-hearted and down to earth. She also seems to share some of her sister's pride and stubbornness.

Apple Bloom's cutie mark is usually related to carpentry,[CM 1] tools,[CM 2] or some type of apple. It is also occasionally speculated that her cutie mark will be in friendship, sometimes due to the fact that she doesn't want the Cutie Mark Crusaders to drift apart as friends,[CM 3] and she is also the first one that wants to actually talk to Zecora, instead of hiding from her. After Twilight Time, her cutie mark is also depicted as related to alchemy or potion making.

In the episode Crusaders of the Lost Mark, she earns her cutie mark, a shield with a heart shaped apple in it.

Apple Bloom commonly appears in fan works alongside her two friends, Scootaloo and Sweetie Belle, as well as Applejack and her family. Some fanfics portrays her daily life with working at the farm, crusading for her cutie mark or facing off against her bullies Diamond Tiara and Silver Spoon. A very popular theme for Apple Bloom and the Crusaders is to explore when they actually get their cutie marks and have to adapt to fulfill their talents, while trying to keep their friendship together.

A common portrayal in fan labor is Apple Bloom being disowned by her family, either because she states that she doesn't like apples,[D 1] because she states she's tiring of apples,[D 2] or because her cutie mark is unrelated to apples.[CM 2][CM 4] The idea is occasionally averted; such that, even though her cutie mark has nothing to do with apples, the Apple family still loves and accepts her.[CM 1]

On the topic of disowning, a less common reason for Apple Bloom being disowned by her family is from improper mannerisms. [D 3]

Apple Bloom is very often shown to have a strong relationship with Applejack, Granny Smith and Big Macintosh, despite the latter rarely appearing together with her in the show. This relationship is often reinforced by the popular theory that the Apple sibling's parents are dead, often putting Applejack as a sort of mother-figure for Apple Bloom.

She is also shown to be very dedicated to her friends, Sweetie Belle and Scootaloo. They are often shown to be just as strong friends as the mane six, and are shown to help each other out and back each other up during their ravenous crusading trips.

Apple Bloom's main rival is often Diamond Tiara, Apple Bloom's schoolyard bully, along with her lackey Silver Spoon. While Diamond is portrayed as bullying all the CMC, she is often seen as having the strongest distaste for Apple Bloom, due to her being her original victim. Some fics will try to mend their relationship in a better way tough, and eventually reform Diamond and Silver.

In the Ask Jappleack tumblr, her relationship with Applejack is portrayed as abusive one until this comic.

For the straight fans, she is shipped with Pipsqueak, or on rare occasions, Spike,[R 3] Featherweight,[specify] or Rumble.[R 4] As of the episode On Your Marks, Apple Bloom is also commonly shipped with Tender Taps. 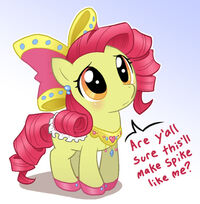 Retrieved from "https://mlpfanart.fandom.com/wiki/Apple_Bloom?oldid=87497"
Community content is available under CC-BY-SA unless otherwise noted.