Allyster Black is an American Multimedia artist and performer. Working within the MLP:FIM community since 2011 on various projects and websites, Allyster has a long history of fan labor.

Starting back in late 2008, Allyster worked as 3D generalist in the online virtual reality video game Second Life. Selling premium scripted content on the marketplace. In early 2011, a few furs showed him My Little Pony: Friendship is Magic and Allyster began working in pony content shortly after. In 2013, now 15 years old, Allyster graduated from Jasper County High School and began courses at a local community college. Over the next few years Allyster taught himself to draw, and began posting pony pictures.

In 2014 Allyster launched a DeviantArt account under the name "Total-Krazen" (Eventually Allyster-Black). Allyster posted for many years on this account, gaining hundreds of thousands of pageviews and tens of thousands of watchers (see Wayback Machine) . In 2017 Allyster's account was compromised and deactivated. Unable to resolve this issue with DeviantArt, Allyster left the platform. Allyster now posts on his website www.AllysterBlack.com or on Twitter @AllysterBlack. Allyster's work can also be found posted by various content creators as part of collaborative projects.

Some Notable Examples of Fan Labor:

Allyster is well know for his work as senior artist for www.EquestriaDaily.com (Shortened hereafter to EQD), the globally renown news site for and by the Brony fandom. While working with EQD, Allyster designed header images for articles, designed site assets, and drawings for the EQD Mascots "Spotlight & Rocket". Allyster Also represented EQD at Brony conventions as a press pony where he ran panels and events, and interviewed show staff.

- Taken from user description (2015) on AllysterBlack.com -

Allyster usually represents himself online with his Original Character (or OC) Ares. Named after the Greek god of war, Ares is a Pegasus who was a modified version of his original OC Darkness. Ares was made during the time Allyster was with EQD and this is the character he used when interacting with users of the site. 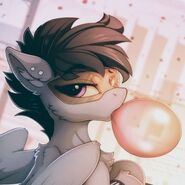 Allyster also has a Commission board where you can request a drawing HERE, and his Terms Of Service HERE 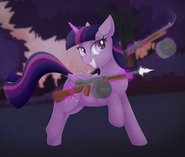 As of 2021, Allyster continues to work in collaboration with many other artists, nonprofits, and groups making original content.