2Snacks is a male brony artist and animator from Brazil. He is best known for his work on the Two Best Friends Play series of Let's Plays, animating the video intros for the series and its Funtime Adventures spin-off.

Not much is known about 2Snacks other than that he is Brazilian and a big fan of My Little Pony Friendship is Magic, which he often references in episodes of Funtime Adventures. He was initially brought to the attention of Matt and Pat of Two Best Friends Play for his Two Best Sisters Play series of animations.

As of April 2014, 2Snacks is experimenting with 3D animated rigs in Autodesk Maya, which he plans to use to animate the next "Two Best Sisters Play".[1]

The animations that 2Snacks is perhaps best known for, Two Best Sisters Play is a series of animated videos that incorporates footage and audio from the Two Best Friends Play series of Let's Plays and 2Snacks' original Flash animation starring Princess Celestia (Pat) and Princess Luna (Matt). Typical scenarios in the series involve Celestia and Luna playing a video game together, usually with Luna playing and Celestia criticizing and berating her.

Pinkie Pie disturbs Twilight as she's hard at work making a potion that will allow non-unicorn ponies to teleport. Pinkie Pie, unappreciative of the potion's color, adds all manner of chemical compounds to the potion before tossing in a bunch of cupcakes. Twilight cries out Pinkie's name in frustration before the potion explodes in both of their faces.

Ponyvania: Order of Equestria Intro is a fan-made My Little Pony Friendship is Magic animation. It is a parody of the opening cinematic for Castlevania: Order of Ecclesia. 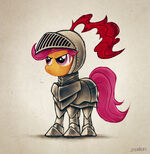 Retrieved from "https://mlpfanart.fandom.com/wiki/2Snacks?oldid=90120"
Community content is available under CC-BY-SA unless otherwise noted.